Jesus realized at once that healing power had gone out from him, so he turned around in the crowd and asked, "Who touched my robe?"(Mark 5:30) 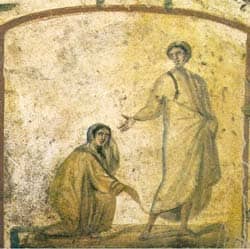 In the previous section of Mark, where Jesus encountered the Gerasene demoniac, Jesus acted in ways that were puzzling, even distressing to those who witnessed them. The puzzlement continues in the next episode of the Gospel of Mark, which is a double-healing story, and one that moves into new territory because one of the healings is actually a resurrection.

This story begins when a synagogue leader begged Jesus to heal his daughter, who was dying from some unnamed disease. Jesus consented to go with the leader, so they headed for his home, with a large crowd following. Suddenly, a woman in the crowd secretly touched Jesus' robe, believing that this would enable her to be healed of a disease that had afflicted her for years. In fact, she was healed instantly. But her hopes for a clandestine healing were dashed when Jesus asked, "Who touched my robe?"

I love the response from the disciples, who took Jesus literally and thought he was being silly. With everybody pressing in around Jesus, lots of people were touching his robe. So why ask "Who touched my robe?" But Jesus knew exactly why he was asking this question, and so did the woman who had been healed. Jesus was asking her to reveal herself, not only to him, but also to the crowd.

We don't know all of the reasons why the woman had wanted to be healed secretly. But part of her motivation surely had to do with the fact that, by touching Jesus, she would make him ritually unclean. This was not something one should do to a Jewish holy man. No doubt the healed woman expected Jesus to be angry with her and the crowd to rebuke her for soiling Jesus' ceremonial status.

When the woman fell before Jesus, trembling with fear, she admitted what she had done. Jesus responded simply, "Daughter, your faith has made you well. Go in peace. Your suffering is over." No mention of uncleanness. No anger. Just affirmation and good news.

So why did Jesus call out this woman, bringing her action into the light? In part, he sought to reassure her, even calling her with the intimate address, "Daughter." In part, Jesus wanted to hold her up as a paragon of faith. And, in part, he wanted all to know that she was healed and restored as a full member of their community. Physical healing was the occasion for a deeper and wider restoration.

Questions for reflection: Have you ever felt like the woman in this story, reaching out to Jesus in desperation? When? What happened? How is Jesus bringing wholeness to your life?

Prayer: O Lord, as I read this story, part of me relates to the disciples. There are so many times when I don't quite get what you're doing. I'm sure I stick my foot in my mouth with you hundreds of times. Probably thousands. Yet you remain in relationship with me, bringing me along patiently and graciously. Thank you!

There is another part of me that relates to this woman. Though I haven't been in her exact situation, there have been many times when I have reached out to you in desperation. Thank you, dear Lord, for being there for me. Thank you for being my Savior, my healer, my hope.

As you did with the woman in this story, so you have done with me. You have asked for more than I expected. You have healed me more deeply than I knew to ask. You have restored me . . . and keep on restoring me . . . with a vision for my wholeness that outstrips my own. All praise be to you, gracious Lord, for your amazing goodness to me. Amen.

Mark D. Roberts, as Senior Director and Scholar-in-Residence for Laity Lodge, is an advisor and frequent contributor to TheHighCalling.org. A Presbyterian pastor, Mark earned his Ph.D. in New Testament from Harvard University. He has written six books, including No Holds Barred: Wrestling with God in Prayer (WaterBrook, 2005). He blogs daily at www.markdroberts.com, and the meditations he writes for The High Calling will be featured at the Evangelical Portal every Thursday.

See a video interview of Dr. Roberts here and here.