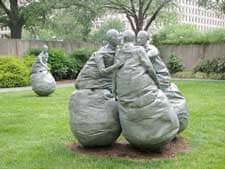 After a couple of days, I noticed that they were standing closer to each other and even talking to each other. Ironically, it seemed like the Parliament had even forced its opposition into dialogue.

Silence may not kill, but dialogue definitely heals.

The two groups of protestors thought the Parliament was attempting to create a new faith. This was not true. Those of us who had convened in South Africa that day were and remain proud followers of our respective faiths. However, we also believe dialogue among faiths is essential for the benefit of all.

Almost daily, our news media hits us with a barrage of negative news about Islam and Muslims. This explains why a large number of Americans hold negative views about Muslims. This negative opinion is not just a statistical reality but it has some real life implications. But the poll that confirmed this dislike for Muslims in the United States also noted that there are a large number of Americans who continue to hold a positive opinion of Islam and Muslims. They are the people who have met a Muslim in real life. That is power of dialogue.

In Chicago, I have seen how interfaith conversations have led to churches, mosques, and synagogues working together for real civic change. Illinois used to ranked 47th among states in terms of healthcare. Today, it holds second place in the nation, thanks to the power of interfaith dialogue engaging each other in action.

The Parliament of World Religions is in essence a big conversation. About 8,000 people are expected to gather in Melbourne, Australia at our next meeting this December. They will spend one-third of their time sharing information about their faith -- honest, straightforward perspectives from believers, not pundits or detractors. They will spend the next third of their time talking about the state of their relationship with people of other faiths, interfaith that is. The last third of the time will be used to discover concrete ways to change the world with a focus on poverty, climate change, the rights of indigenous people, and peace.

Climate change, hunger, and peace are issues that concern all of humanity. These challenges are also large enough to require focused attention from all religions and   spiritual traditions. But how can faith help when people of faith are not in conversation with each other? Dialogue is crucial for the tremendous changes needed for humanity to move forward, especially today, where conflict and war have become a lifestyle for millions around the world. We cannot promise that we will resolve all of the conflicts. But we do believe that dialogue will reduce the chance of warfare and increase the possibility of reconciliation. It was a series of dialogues that Nelson Mandela started with his captors at Robben Island that convinced them of a brighter, apartheid-free future for both whites and blacks in South Africa.

With open hearts and minds, the Parliament's participants will be returning back to their neighborhoods in our shared global village enriched with new experiences, new friendships, and new success stories after a joyful six-day long intensive listening and learning experience. Many of them will be making their personal commitments in writing on how they plan to change the world.

Abdul Malik Mujahid is an American Muslim religious leader, activist, film producer, and non-profit entrepreneur. He is president of Sound Vision Foundation and the incoming chairman of the board of trustees of the Council for a Parliament of the World's Religions.