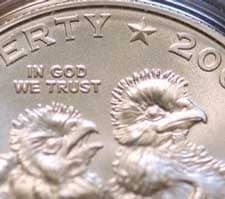 Are Americans charitable, or are they stingy? On the one hand, we often hear that American philanthropy is exceptional, by international standards -- a claim that is reinforced by events such as the 2004 South Asian tsunami (the relief efforts for which Americans privately gave more than $1.5 billion) or Hurricane Katrina (to which Americans have probably given $3.4 billion to date).

On the other hand, the conventional wisdom is often challenged by people who have a different view of Americans' innate generosity. For example, former President and Nobel Peace Prize laureate Jimmy Carter said in 2004 that Americans are indifferent to the suffering of others around the world. "The problem lies among the people of the U.S.," he declared. "It's a different world from ours. And we don't really care about what happens to them." Europeans often add that America is an ungenerous nation because our government foreign aid budget is lower than that of many other developed countries as a proportion of the American economy (although in absolute dollars, we lead the world).

Recent research from the Comparative Nonprofit Sector Project at Johns Hopkins University seems to support the view that America is not as generous as we might have thought. Examining international data collected between 1995 and 2002, the Hopkins researchers concluded that American charity lagged behind that of many Western European nations, including Holland, Sweden, Norway, France, and Great Britain. This surprising conclusion comes after the researchers added volunteer time to money gifts and excluded religious gifts. They valued time at the "average wage of a community worker," and then divided the total sacrifice by each country's gross domestic product (GDP) to estimate the total income (or foregone wages) devoted to charitable purposes.

How should we sort out these claims? Is American generosity actually a myth?

The European claims about stingy American foreign aid are easy to dispense with, because they ignore the enormous private gifts that characterize American generosity (such as donations following the tsunami), and therefore greatly understate true American humanitarian assistance. The U.S. Agency for International Development notes that official U.S. development assistance, at about $10 billion, is roughly 0.1 percent of GDP, but this amount is accompanied annually by about $50 billion in aid from private sources, including foundations, religious congregations, voluntary organizations, universities, corporations, and individuals (in the form of remittances to friends and family). All told, American overseas aid -- mostly private, not public -- comes to about 0.5 percent of GDP (approximately $200 per American). And this does not even count more controversial aid sources, such as military aid and private investment abroad by American businesses. Carol Adelman makes these points in great detail in the Hudson Institute's new Index of Global Philanthropy.

The Hopkins claims are more complicated, and not so easily dismissed. First, there is a built-in problem finding evidence on comparative charity: Data on European giving behavior are seldom collected. While there are multiple new and overlapping data sources on giving in America, one is lucky to find any recent data at all on private giving in Europe. In fact, the Hopkins data on money donations in Europe are mostly from the 1990s. Still, these data show a huge gap in money giving: No western European population comes remotely close to the United States in private charity. Per capita, Americans give three and a half times as much as the French, seven times as much as the Germans, and fourteen times as much as the Italians.

Perhaps this comparison is not a truly fair one, because it does not take account of the fact that average incomes vary between countries quite a bit, as do the prices of goods and services. For example, it would not be realistic to expect a family in Ireland -- with an average annual income that is only two-thirds of an average American family's -- to give as much.

Therefore, it would be useful to see whether the charity gap between America and Europe persists after correcting for average income. To do so, I divide each country's total private giving levels by its price-adjusted gross domestic product (GDP) in the same year, indicating the average percentage of "purchasing power" that a citizen in each country gave to charity that year. But most of the results don't change much. Even accounting for differences in standards of living, average Americans in the 1990s gave more than twice as much of their incomes to charity as the Dutch, almost three times as much as the French, more than five times as much as the Germans, and ten times as much as the Italians. Similar adjustments for differences in tax systems have little impact on the difference in private giving between the U.S. and Europe. In other words, Europeans simply give far less money, privately, than Americans.