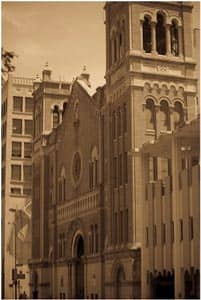 It's not easy to generalize about American Catholics. There are more than 65 million of us, and a more diverse slice of America is hard to imagine. Catholics are now well-represented in every part of the country and at all points along the socio-economic scale, from the very top to the very bottom. Yet one generalization about Catholics in America does seem to be sustained by the research data: Catholics are among the worst givers in the country.

Sociologist Andrew Greeley, who has studied patterns of Catholic giving for decades, suggests that 20 percent of the U.S. Catholic population provides 80 percent of the Church's resources. Veteran Catholic pastors vary this slightly by talking about the "one-third/one-third/one-third rule." One-third of the registered members of a parish give constantly and generously, one-third give occasionally, and one-third give essentially nothing.

Diocesan figures gathered by the International Catholic Stewardship Council are revealing: The small rural diocese of Wichita, Kansas, reports the highest per-household rate of weekly church contributions, at slightly over $20 per household per week, a figure that would make tithing Protestants and synagogue-supporting Jews scratch their heads in wonderment. Things are far worse, though, in major Catholic urban centers like Chicago (about $6.80 per week per household) and Los Angeles (about $3.65 per week per household).

Figures for that mainstay of Catholic fundraising, the annual diocesan appeal, do not paint a much rosier picture: 21 percent of Chicago's Catholic households participate in the annual diocesan fundraising drive (contributing an average gift of $118); Los Angeles does slightly better in terms of the average gift ($133), but has only 16 percent participation. Even those dioceses that report higher-than-average percentages of participation (i.e., in the high 30s to middle 40s) also report average gifts well below $200 per household. Catholic officials regularly boast of the success of the annual national collection to provide retirement funds for those aging sisters who once staffed the kind of Catholic schools where Bing Crosby and Ingrid Bergman fought their cinematic turf battles. Yet the 2003 collection only raised $28 million, which is a bit more than $1 per adult Catholic in the United States.

Why this parsimony? Catholic pulpits are rarely used to talk about money, in the sense of inculcating regular patterns of stewardship, nor is tithing preached as a spiritual discipline in U.S. Catholicism. When the Church asks, Catholics are, in the main, inclined to give (if at levels considerably less than their Protestant and Jewish fellow-citizens). One medium-sized U.S. metropolitan diocese, for example, will raise far, far more than its original goal of $135 million in a five-year capital campaign that began in 2004, but the percentage of Catholics participating in that campaign looks to remain stuck in the usual "one-third" grooves. The question of how to instill a greater sense of responsible generosity in U.S. Catholics has thus become a significant issue for the 21st-century Church, whose vast network of parishes, schools, social welfare, and health care institutions can no longer rely on the inexpensive labor of priests, brothers, and sisters. (Indeed, one may well argue that, historically, the largest gifts in American Catholic philanthropy have been the giving up of sons and daughters to Church work. But the decline of religious vocations is a story for another day.)

Low levels of giving to Church appeals is not the only problem of Catholic philanthropy. Many U.S. Catholics have "made it." Almost 30 years ago, sociologist Andrew Greeley stunned just about everyone (including his fellow-Catholics) by reporting that Irish Catholics were second only to Jews in levels of educational and economic attainment among American ethnic groups. And the Irish weren't alone among their high-achieving Catholic brethren. Thus, in a predictably American way, Catholic wealth in recent decades has begun flowing to foundations dedicated to Catholic causes. As Dr. Francis Butler, president of FADICA (Foundations and Donors Interested in Catholic Activities), has noted, Catholics "are forming community foundations and setting up trusts rather than just turning over their money to their dioceses. This is the wave of the future for Catholics."

And while the Catholic Church's bishops and priests will have some role in shaping the giving of Catholic foundations (of which Butler estimates there to be about 1,000, with the number certain to rise), the new Catholic philanthropy will be largely designed and operated by lay people, who will mostly work outside the formal structures of the Church. Some churchmen (and indeed some laymen) will likely find this uncomfortable. Yet this is just what the reforming Second Vatican Council had in mind when, in the 1965 "Decree on the Apostolate of the Laity," the bishops challenged lay Catholics to sanctify the world. Sanctity, the Council insisted, was not a matter for the sanctuary alone. Every baptized lay Catholic ought to strive for holiness and virtue, precisely in and through responsible activism in "the world."