Dogs at the Master's Table 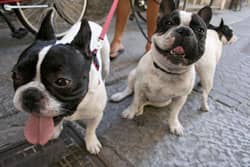 Not the heroic and accomplished, but the humble and beloved are invited to the Master's Table. Read more.

Ramses the Great, Lord of the Nile, was the largest dog we had ever owned.  Although other Boxers have joined our family, none was his size.  We used to think that Rainy was fairly large (50-55 pounds), but Ramses grew and grew until Rainy looked puny beside him.

Once, while eating at the dining table, I noticed Rainy sitting on her haunches and gazing longingly at the table.  Ramses brazenly strode to the end of the table and set his royal chin upon the tabletop as though he owned it all (and I suppose that, as Pharaoh, he does).  From his loftier vantage point, he surveyed the fine foods arrayed upon the table: the potatoes, the dressing, the gravy, turkey, and rolls.  (Yes, yes, I know, we are lousy at training dogs.  I cannot for the life of me figure out how our children turned out so well, since our  dogs are so ill-mannered!)

It is not fun to be on the outside of a feast, looking in.  On Thanksgiving, we were met with many soulful, pleading looks from big brown eyes.  And they received their Thanksgiving treats: turkey skin and gizzard, heart and liver.  They decided that eating at the Master's Table was fine indeed.

Psalm 36:8 describes the overflowing delight of those who eat in the home of God:

They feast on the abundance of your house; you give them drink from your river of delights.

God's cupboard is never bare, and his feast will put even the greatest of human feasts to shame.  God brings forth from an everlasting supply of good things.  And perhaps the best news of all comes in Luke 13:28-30:

Have you ever been invited to an extravagant feast?  Perhaps you haven't.  Perhaps you -- like me -- do not "rate" socially.  Maybe you are not "appreciated" by the successful and the famous.  Some people surely would not appreciate the fact that Ramses sets his chin -- royal though it be -- on the master's table.  I don't mind a bit.

Why?  Because he is beloved.  I welcome Ramses to my table not because he has earned a seat, but because he is a part of my family and I want to have him there.

I may never be invited to eat with the beautiful people, with those who have amassed fortune and fame.  That's fine with me.

Someday, I will eat and drink at the table of God.  Someday, I will be the guest of the Creator of all things.  Why?  Not because I was a great success in life.  That's not it at all.  It's because I am His and He wants to give me all He possesses.  Revelation 21:7 promises that those who overcome will inherit "all this."  I can almost see God turning around as He spoke those words to John, taking in all of the heavenly riches with His eyes, stretching out His arms to indicate all of the joy and blessing that will be lavished upon God's children in heaven.

I look forward to enjoying that feast with you.