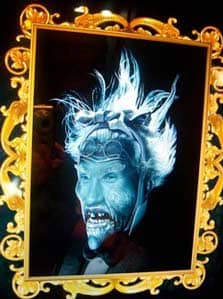 As A Christmas Carol begins, Ebenezer Scrooge is one of the most unlikable characters in all of literature. Here is the full version of Charles Dickens's classic description:

Oh! But he was a tight-fisted hand at the grindstone, Scrooge. A squeezing, wrenching, grasping, scraping, clutching, covetous old sinner! Hard and sharp as flint, from which no steel had ever struck out generous fire; secret, and self-contained, and solitary as an oyster. The cold within him froze his old features, nipped his pointed nose, shrivelled his cheek, stiffened his gait; made his eyes red, his thin lips blue; and spoke out shrewdly in his grating voice. A frosty rime was on his head, and on his eyebrows, and his wiry chin. He carried his own low temperature always about with him; he iced his office in the dog-days; and didn't thaw it one degree at Christmas.

Don't you love that description? Now there's a man in need of an attitude adjustment, or, indeed, a life adjustment. And that's exactly what happened to Ebenezer Scrooge, and in less than 100 pages! By the end of the story, here's the new Scrooge:

Scrooge was better than his word [to Bob Cratchit concerning help for his family]. He did it all, and infinitely more; and to Tiny Tim, who did not die, he was a second father. He became as good a friend, as good a master, and as good a man, as the good old city knew, or any other good old city, town, or borough, in the good old world. . . . [A]nd it was always said of him, that he knew how to keep Christmas well, if any man alive possessed the knowledge.

What in the world can explain such a transformation?

Well, one might begin by saying that nothing in this world can account for it. Scrooge needed, and indeed, received supernatural assistance. The change in Ebenezer Scrooge is a direct result of the impact of four ghosts upon him, the spirit of his departed colleague Jacob Marley, and the spirits of Christmas past, present, and future. The transformation of a man like Ebenezer Scrooge requires other-worldly influence. In this regard, Ebenezer Scrooge is like his literary forefather Gabriel Grub (see "Transforming Scrooge"), though Scrooge was haunted by ghosts rather than goblins. And, unlike poor Grub, Scrooge didn't get physically pummeled into submission. The ghosts worked on his heart, not his body.

It wasn't the mere fact of ghostly visitors that changed Scrooge, however, as if he had been scared into repentance. Rather, it was what he experienced with the spirits that made all the difference. Indeed, the ghosts weren't really necessary for Scrooge's transformation. It could have all been just a dream with the same result, though that would have been much less fun.

The Impact of the Spirit of Jacob Marley

Before Scrooge is visited by Jacob Marley, he shows not the slightest bit of kindness or tenderness. His heart is hard. His focus is utterly self-centered. He has nothing to offer others but scorn and an occasional "Humbug!" But it is in his interaction with Marley's ghost that Scrooge first offers the tiniest morsel of positive feeling to anyone.

When the ghost of Jacob Marley visits Scrooge, he at first doubts the veracity of his visitor. In one of my favorite lines from A Christmas Carol, Scrooge argues that his vision is probably "an undigested bit of beef, a blot of mustard, a crumb of cheese, a fragment of an underdone potato. There's more of gravy than of grave about you, whatever you are!"

Yet with loud cries and a horrifying change of appearance, Marley's ghost prevails upon Scrooge's good sense. He finally believes that the ghost is real. Scrooge's first response to this recognition is fear and trembling. His fear grows when he learns that he is destined to wear even heavier post-mortem chains than the onerous ones that Marley himself is forced to carry. "Speak comfort to me, Jacob," Scrooge begs, in his first real demonstration of some sort of human vulnerability. Yet Marley can offer no real comfort.

Here we catch a glimpse of tenderness in Ebenezer Scrooge, though it is completely self-centered. He desires comfort because he is terrified to learn about the Hell that awaits him after death.

Thus the frozen heart of Scrooge begins to thaw just a smidgen, even if his feeling is still egocentric.

As Marley continues, he explains that he has come to warn Scrooge so that he might escape Marley's dire fate, "a chance and hope of my procuring, Ebenezer." To this Scrooge responds, "You were always a good friend to me, . . . Thank'ee." Here is the first positive emotion Scrooge shows, and the first bit of tenderheartedness directed at someone other than himself.