In Praise of "Happy Holidays" 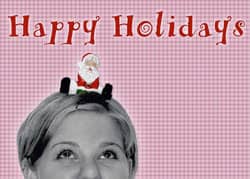 Here we go again. If it's December then it must be time for that annual Christmas tradition established a few years ago -- the outrage mongering by conservatives over an alleged "War on Christmas" being waged by a cadre of secularists who employ the phrase, "Happy Holidays." Particularly galling to these self-appointed defenders of tradition are retailers that avoid the word Christmas in their advertising and in-store decorations. In recent years groups like Focus on the Family, the Catholic League, and the American Family Association have launched a variety of vigilance campaigns, including an "It's OK to Wish Me A Merry Christmas" button campaign and various boycott threats and "watch lists" identifying "Christmas-unfriendly" retailers.

I must admit that the expression Happy Holidays once struck me as vapid and meaningless -- essentially the December version of the all-time vapid and meaningless phrase of modern times, "Have a nice day." But all this War on Christmas hysteria in recent years has led me to a new and heartfelt appreciation for the expression, for I see that it embodies both a fundamental American value and, strange as it may sound, one of Christmas's core religious ideals.   I should point out before wading any further into this minefield that I come to this contentious issue as a Christian who attends church weekly and even sings in the choir. In other words, a cranky, axe-grinding atheist or free-wheeling new age spiritualist I am not.

So why defend Happy Holidays? Let's begin by focusing on the profound republican virtue that lies at the heart of Happy Holidays: respect for each and every citizen's right to their own religious beliefs (or non-beliefs). As Americans we take for granted the idea that people of different faith traditions can live together in harmony. But history makes it abundantly clear that America's remarkably successful experience with religious pluralism is the exception, not the rule. Who can calculate the oceans of blood spilled over the centuries, from the Crusades to Darfur, in the name of religious zealotry? Indeed, American society was once beset with religiously-inspired violence. Scores died in anti-Catholic and anti-Mormon riots in the 1840s and 1850s.

It has taken several centuries to develop and enshrine America's much-cherished tradition of religious tolerance. This effort has succeeded even as the number of religious faiths in America greatly multiplied. It's a hard-won tradition and Americans should remain ever vigilant in protecting it from any group that seeks to impose its orthodoxy on everyone else. The "Merry Christmas, or Else" zealots are not preaching violence, but they are promoting a dangerous, unwelcome, and ultimately un-American form of religious intolerance.

Even more compelling, especially for those (like me) who consider Christmas a religious holiday, is the spiritual argument in defense of the phrase Happy Holidays. Has anyone seriously interested in the religious meaning and significance of Christmas stopped to contemplate the absurdity of a campaign demanding that retailers, as Focus on the Family put it a few years ago, "put Christmas back in the holidays"?

Retailers? You mean the people leading the relentless charge to transform Christmas into a grotesque exhibition of materialist excess, are now responsible for upholding the true meaning of Christmas? Would anyone take seriously a campaign that urged beer brewers to "put sobriety back into tailgating"? Or Las Vegas to "put commitment back into express weddings"?

Put simply, assailing individuals and retailers who fail to say Merry Christmas is itself a very real assault on Christmas. After all, the holiday celebrates the birth of Jesus, an event the Bible tells us was hailed by a choir of angels singing, "Peace on Earth and goodwill toward men." Raging against the inclusive, tolerant, and ultimately harmless phrase, Happy Holidays, runs directly counter to this theme.

So here's wishing you Happy Holidays -- and all that implies.

This article was first published at History News Network and is reprinted with permission.

Mr. O'Donnell is an associate professor of history at The College of the Holy Cross in Worcester, MA.