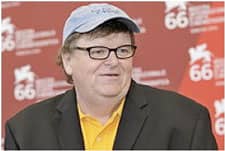 Moore grew up in a working class Irish Catholic family in Flint, Michigan and in high school considered going to seminary and studying for the priesthood. He readily declares that his social justice perspective is inspired by nuns and priests from his high school days in the late ‘60s who told the students that, as Catholics, they should be concerned for the poor. In a recent interview on "Tavis Smiley," during which he reiterated the Catholic roots of his commitments, Moore identifies himself as a practicing Catholic who attends church from time to time.

Moore has produced a number of film documentaries that express outrage against wealthy exploiters of the people. Roger and Me (1989) protests the wealthy CEO of General Motors, Roger B. Smith, who threw thousands out of work by closing the auto plants in his hometown of Flint, Michigan, only to open new plants in Mexico at much lower wages; Bowling for Columbine (2002) against the gun lobbyists and the murderous results of the unrestricted right to bear arms in the U.S. Moore attacked George W. Bush and the war in Iraq in Fahrenheit 9/11 (2004) and the lack of a government supported health care system in Sicko, (2007) which praised European and the Cuban state health care systems. In 2009 he returns to the theme of the rapacious American economic system and its super-wealthy elite in Capitalism: A Love Story.

Do these protests against injustice reflect Catholic social teachings? Is Catholicism anti-capitalist? Catholicism is well known as a determined foe of Communism, yet most Americans are unaware that Catholicism has also been highly critical of capitalism. Communism is faulted in Catholic social teachings for its atheism, forced collectivism, and advocacy of class warfare. But capitalism is also criticized as a materialistic system that lacks ethical values. Although Catholicism defends the right to private property, this is not seen as absolute. It is limited by the claims of social responsibility to the larger society. Unrestricted laissez-faire policies are rejected, and the state is seen as having a positive role to play to create a just and equitable distribution of resources to all.

The American concept of human rights is limited to political rights, such as free speech, the right to vote, and habeas corpus. Catholic social teachings is broader, claiming that every person has a right to employment, health care, and education.

Fundamental to Catholic teaching is the idea of the just wage, that employers must pay their workers adequately to meet basic needs, such as housing, food, clothing, schooling and health care. From the 1891 social encyclical, Rerum Novarum, "Of New Realities," subtitled "On Capital and Labor," the church has supported the right of workers to organize trade unions and engage in collective bargaining.

Growing up in the mid-West in the late ‘60s and early ‘70s (Moore was born in 1954), he would have been familiar with activist priests and nuns who were supporters of civil rights and labor unions. The Catholic Worker movement that identified with the poorest of American inner cities and the Berrigan brothers who led Catholic opposition to the Vietnamese War would have been well known. The nuns and priests from his youth that Moore cites would have been broadly sympathetic to these values, without advocating a radical alternative, such as socialism. Promotion of labor unions, laws guaranteeing a "just wage," pensions and social security would have been the sort of policies promoted.

This seems to be Moore's perspective also, who speaks broadly of creating an economically and socially just democracy. While it is unlikely that Moore has spent much time poring over papal social encyclicals (which are not easy to read), his films reflect this general bias of Catholic teachings favoring the "preferential option for the poor and the vulnerable."

This article was first published at Religion Dispatches and is reprinted here with permission.

Rosemary Radford Ruether is Visiting Professor of Feminist Theology at Claremont School of Theology and is the Carpenter Emerita Professor of Feminist Theology at Pacific School of Religion, as well as the Georgia Harkness Emerita Professor of Applied Theology at Garrett Evangelical Theological Seminary. She has enjoyed a long and distinguished career as a scholar, teacher, and activist in the Roman Catholic Church, and is well known as a groundbreaking figure in Christian feminist theology. Ruether has published numerous books, including Sexism and God-Talk, In Our Own Voices: Four Centuries of American Women's Religious Writing (ed. with Rosemary Skinner Keller), andThe Wrath of Jonah: The Crisis of Religious Nationalism in the Israeli-Palestinian Conflict. Her most recent books include Goddesses and the Divine Feminine: A Western Religious History (May 2005), Integrating Ecofeminism, Globalization, and World Religions (Nature's Meaning 2005) and Mountain Sisters: From Convent To Community In Appalachia. Most recently, she collaborated on a multi-volume Encyclopedia of Women in American Religion, with Rosemary Skinner Keller (2006).