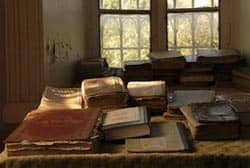 Two studies, both conducted in recent years but with different methodologies, show that Jewish philanthropists contribute the overwhelming majority of their dollars to universal, rather than Jewish, organizations and causes. In 1998, professor Jack Wertheimer studied the 232 foundations in America that self-identified as giving at least $200,000 to Jewish causes. He found that even these foundations gave nearly two-thirds of their annual funding, $487 million, to non-sectarian causes. Similarly, a 2003 report by Dr. Gary Tobin and colleagues at the Institute for Jewish and Community Research examined the 865 philanthropic gifts of $10 million or more made by all American donors between 1995 and 2000. While nearly 25 percent (188 gifts totaling $5.3 billion) were made by Jews, the Jewish mega-givers made fewer than 10 percent of their gifts to Jewish or Israeli organizations. While these two studies do not represent the full panoply of Jewish giving, most of which is by individuals giving much less than $10 million, it seems likely that the data capture the overall thrust of giving by Jews.

No one suggests that Jewish giving should be limited to sectarian causes. Judaism is broadly conceived, premised on the notion that people can be God's partners in shaping a world in which power is obtained and employed to seek justice and protect the weak. When God brought His fledgling people to Mount Sinai, He revealed a comprehensive legal system, covering Jewish national governance, interpersonal relations (including civil law), and individual relationships with the divine. The scope of Jewish concern covers all activities that advance the interests of humanity as perceived through the Jewish moral lens.

Still, the broad scope of Judaism does not convert all philanthropy into Jewish philanthropy. Donors drawing on a Jewish worldview will prioritize their giving in ways that reflect Jewish ideas and values, and they will also contribute significantly to Jewish education, which is the engine that drives the continuity of Judaism.

Given the integration, even assimilation, of most Jews into American society, it is not surprising that Jewish giving generally mirrors non-Jewish giving. In Dr. Tobin's study, Jewish mega-givers gave marginally more than their non-Jewish peers to higher education and significantly more to arts and culture, but the overall patterns of Jewish and non-Jewish giving were similar. Few Jewish philanthropists have had the benefits of an intensive Jewish education that might give their philanthropy a more distinctively Jewish sensibility.

How would giving to universal causes be different if it were an expression of a Jewish worldview? First, the philanthropic priorities might change a bit. Some of the resources now being invested in arts, culture, and elite higher education would be rerouted to address poverty, education for the masses (especially job training programs), medical research, and other causes that will improve the lives of the most disadvantaged among us.

Equally important, the thinking behind the giving would draw more from Jewish tradition. While money is a necessary ingredient for addressing most of the challenges faced by our society, solutions ultimately stem from ideas. Judaism is rich in ideas and experience that are useful to philanthropists. Because Judaism is a religion built on law (even ethical requirements such as charity are governed by Jewish law), Jewish scholars have generated a millennia-long string of legal precedents that are essentially an untapped resource for Jewish philanthropists.

For example, in recent decades both government and private philanthropy have tried varying approaches to solving the problem of poverty in America, often struggling to find ways of giving without generating dependence. From long ago, a primary goal of Jewish charity law was bringing the needy to self-sufficiency. Thus, Jewish law places the highest priority upon providing jobs to the poor and denies support to those who refuse to work. In a host of other ways, Jewish charity and civil law seek to protect the disadvantaged from neglect and exploitation while building up charity recipients' sense of responsibility and self-respect.

Jewish law and thought have addressed a diverse array of additional social problems that now engage philanthropists and public policy thinkers. Jewish philanthropists should draw on these sources as they craft programmatic solutions to contemporary issues.