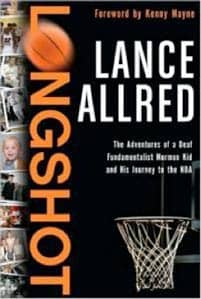 I don't much care for basketball. I'm horrible at it myself and I've never really lost myself in the game watching others play it. I can respect what Michael Jordan accomplished, but it doesn't interest me all that much. That said, I was moved by Lance Allred's description of the early morning practices he would have with his coach in high school in his memoir, Longshot: The Adventures of a Deaf, Fundamentalist Mormon Kid and His Journey to the NBA.

Those mornings were the purest form of basketball I ever knew. Just me, [coach Kerry] Rupp, and a ball. No money, no boosters, no politics. It was the pure love and innocence of the game, when it was still a game for me. We both worked and sweated, our shoes squeaking and echoing out the gym and down the empty hallways. I'd pay to have those moments again, those moments of hard work and sacrifice when I knew not what to expect as far as what my future held, with no sense of entitlement, no reward or motive in sight other than just the pure love of the game. I had no idea if I was ever going to be good enough to play college ball. We were challengers of the unknown.

While I have never been a particularly dedicated athlete, Allred's drive to excel, to find the limits of his physical ability and push himself beyond them, is inspiring, in spite of the likelihood that it is at least partially motivated by his obsessive-compulsive disorder. The drive to be good can be, I think, found in all people: the polygamists amongst whom Allred was raised, the athletes with whom he competes in amateur, semi-pro, and professional basketball, and his own family, struggling to define themselves within and without the Apostolic United Brethren, the fundamentalist Mormon sect of Allred's youth.

While the tales of Allred's struggles and triumphs in basketball are interesting (particularly his harrowing accounts of life in European basketball), I was interested in this book primarily for its depiction of the Pinesdale group of the Apostolic United Brethren fundamentalist group. This group, currently led by J. LaMointe Jensen, was originally led by Rulon Allred, who was succeeded by his son Owen. He had another son, Louis. Louis Allred was my wife's uncle, a fact that her family still doesn't quite know what to do with.

Sharon* married Louis in an LDS temple. Louis had left his father's church in his youth, rejecting its tenets and moving into the "mainstream" church. He met Sharon*, they fell in love, and got married, moving to California. Louis never hid who his father was, but he was adamant that he would not return to the fold. His father, however, had other ideas and eventually called Louis back. Louis loved his father. He returned and took a second wife, not informing Sharon* of his intentions. Sharon* was devastated initially, but was eventually convinced of Louis's continuing love for her. She returned to him and joined the group.

Some time thereafter, Rulon was murdered by members of a different polygamous sect. As a son of the former prophet and the brother of the current prophet, Louis's position in the sect became more prominent. But, depending on who you ask, his faith was not that of the other members of the Council that runs the Brethren. Louis eventually committed suicide. Sharon* remained with the group. She did get the pleasure, according to Lance Allred, of hearing Marvin Jessop state that Louis killed himself because he was weak and that Louis would go to hell. In my wife's family, Louis is a kind of tragic figure, done in by his love for his father, which dragged him into a religion and lifestyle he didn't believe in. Lance Allred offers his father's (Louis's brother's) assessment that the day of the funeral was the worst of his father's life and moves on.

Lance Allred has a gift for anecdotes and his stories of growing up polygamous are vivid. They range from stabbings and out-of-wedlock pregnancies to his favorite uncle's pastime of randomly shooting the neighbor kids with BBs. Every story is steeped in rural poverty, scored by Garth Brooks and featuring large breakfasts and hosts of screaming kids. Allred also describes the isolation of living polygamous in the suburbs, where your friends are primarily your family and you all live too close together.

Owen Allred is prominent in polygamous circles for advocating against underage marriage and sexual abuse. However, Lance Allred repeats accusations in this memoir that sexual abuse occurred in the Pinesdale community. While Lance wasn't a witness or victim, he implies that he knows those who were and that, one day, his father will write a summary of his experiences in the AUB. It was accusations of sexual abuse within the group's leading Council that led the elder Allred to renounce them. He and his wife (they had never taken another spouse) left with their family in the aftermath of those accusations. I won't spoil the events of their escape, but they do parallel classic Mormon tropes regarding the presence of evil and divine intervention.