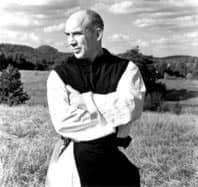 During his lifetime, the famous monk and spiritual writer Thomas Merton, a contemporary of Hemingway, Kerouac, and Fitzgerald, wrote more than seventy books, including the classic The Seven Storey Mountain (SSM). In Mark Shaw's new, inspiring book, Beneath the Mask of Holiness: Thomas Merton and the Forbidden Love Affair That Set Him Free, the true Merton story is finally exposed, indicating that the gifted wordsmith was not the peaceful and contemplative soul he appeared to be, but was suffering due to guilt over sinful pre-monastic conduct and never having learned to love and be loved. When God presented him with a student nurse half his age, named Margie Smith, to love, Merton struggled to decide whether to choose the woman he called "a miracle in my life," or the God who had saved him. Above all, Merton questioned whether he was truly a converted Christian, providing a steppingstone for examining exactly what is meant by the term "conversion" and how it applies to religious seekers, both Protestant and Catholic. Here is the first excerpt from Shaw's book.  Join the discussion on religious conversion here.

Perception of Thomas Merton's state of mind regarding whether he was a true, converted Christian may differ depending on whether someone is a Catholic, whose conversion is viewed as gradual in nature; a Protestant, for whom a defining moment's conversion is the focus; a kindred spirit of Eastern religions, where aspects of conversion are mainly unknown; or an atheist, who could care little about conversion experiences. Regardless, the question of whether Merton was a converted Christian is significant [to his spiritual path] since he gave the impression that he was Christ-like in nature through his words, messages, [and more than sixty books], all of which portrayed someone who certainly sounded converted, someone who was one with God.

Like any believer, Merton wrestled with the concept of true Christianity throughout his life. In March of 1959, after ruminating about monastic obedience, he wondered about real and personal values, under the pretense of love, before asking, "When will we ever become Christians?" After a scintillating conversation with [friend] Robert Lax and [publisher] Robert Giroux when they visited in May of that year, Merton decided he must face the disturbing fact that he was "not really a monk and a Christian. . . ." even though he believed monastic existence was the life of a real Christian.

The topic of conversion was a constant in Merton's life. It began when he wrote SSM in his early to mid-30s and would continue to be an area of concern until he died. In his autobiography, he concluded that, "because of the profound and complete conversion of my intellect, I thought I was entirely converted." This was because, he swore, that due to his belief in God and the teachings of the church, he could debate his resolve all night, which made him believe that he was a zealous Christian. But he knew true conversion of the intellect fell short, because if his will was not with God then this intellectual conversion was indefinite in scope.

As late in his life as mid-May 1967, at the age of 52, Merton was still a seeker, writing, "I experience in myself a deep need of conversion. . . ." This was not surprising in light of the Catholic view of conversion being gradual, but it was apparently unknown, or disregarded by those who thus wanted to pin down an actual, convenient moment of conversion for Merton.

Scholars have argued the slippery slope of Thomas Merton's true Christian conversion for 50-plus years. How Merton ultimately dealt with the question of  [choosing] Margie or God in 1966 directly relates to whether he was in a state of being one with God, or disabled in his true beliefs, having slid backward as the years passed at the Abbey of Gethsemani. Certainly even being tempted in a sensual way indicated his unrest with the state of his spiritual being and caused him agony while he pondered his decision.

Specific moments of conversion mentioned by those inspectors of Merton's life include his visits to various churches in Rome as an 18-year-old in 1932, mystical vision of his father in a pensione room, his baptism at the Church of Corpus Christi, his decision to enter Gethsemani, his monastic vows, and his ordination. Perhaps it occurred when he confessed past sinful deeds in the forthright letter he wrote to [a close friend], the Baroness de Heuck, in 1941.