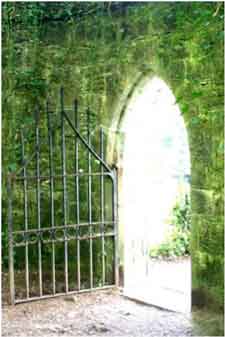 I am fascinated by the human desire for renewal and new beginnings. St. Benedict in his Rule for monasteries writes "always we begin again."  This impulse is the heart of what makes anticipation of the New Year kindle all of our longings for a richer way of being in the world.  There is something so very hopeful to me in this fundamental impulse. January 1st brings out our fervent desires for the future and our commitments to change, whatever that change entails. Our inclination is usually a set of "resolutions" aimed at working harder for whatever it is we want or fixing our self-perceived flaws. There is nothing wrong with making resolutions. However they often aim so high without first cultivating the change of heart necessary to prepare space for these new possibilities to take root.

More and more often now people are taking the celebration of New Year's as a time for reflection on what has gone before and for listening to their longing for what lies ahead. Each year I see retreat centers and other groups offering options for meaningful ritual and practice. While celebrating with friends can be a very joyful thing, the late night party on December 31st with its endless supply of alcohol has become far less satisfying for many. People are hungering for more depth to this time of transition. We are recognizing the opportunity of a threshold.

Doors and thresholds offer us potent symbols of new and unexplored possibilities. They can evoke a sense of powerful potential and both internal and external worlds we have yet to explore.  St. Teresa of Avila, the 16th-century Carmelite mystic, wrote the classic book The Interior Castle in which she likened the soul to a castle made with concentric rooms. As we deepen in the spiritual life, we move further into the interior castle of our souls and discover hidden rooms previously unavailable to us.

New Year's day as we currently celebrate it is a part of the Gregorian calendar, which was proposed in the 16th century as a reform of the Julian calendar and is the most widely used calendar today.  It is based on the solar year -- the actual length of time it takes for the earth to revolve around the sun.

Suggestions for Ways to Celebrate the New Year in Meaningful Ways:

One of the reasons our secular celebration of the New Year is often so disappointing is that we do not take time to prepare ourselves for this time. We begin the year full of resolutions and promises to ourselves to perhaps eat better, exercise more, work less, find more time for friends or for ourselves.  But these resolutions often rise up out of our sense of scarcity and the busyness and immediate desires we feel at the surface of our lives.  Consider taking some time to prepare -- even if only for an hour or two -- to really listen for the deeper longings pulsing within you.  What emerges from that place of stillness and grounding in your holiness and goodness, rather than from a list of your shortcomings?  What new doors are waiting within you to be opened?

In Jewish tradition, the New Year begins with the ten Days of Awe between Rosh Hashanah and Yom Kippur in autumn.  During this time, Jews reflect on those relationships during the past year that need reconciliation, recognizing that the way to move forward in more fullness is by acknowledging those places where we have failed another person in the past and then making amends.  Is there someone you have hurt this past year through your words or actions? Is it possible to ask for their forgiveness?  Is there someone who has hurt you this past year through words or actions? Can you offer them forgiveness?

In Christian tradition, the New Year begins with the season of Advent four weeks before Christmas.  There is wisdom in beginning the year during this darkest season, offering us the image of being in the dark and fertile womb of creation anticipating new birth.  In the days leading up to your celebration of the New Year, honor the language of nighttime and darkness by recording your dreams. Keep paper and a pen by your bed and before going to sleep ask to receive dreams with wisdom for the year ahead.  When you awaken, try to jot down some notes about images and feelings you notice before you get up and lose those threads that connect you to the dream's story. Honor the way dreams speak in non-linear and intuitive language. As a part of your New Year ritual, consider spending time with your dreams, perhaps making a collage of images that have appeared to you and reflect on what these have to say to you about what lies ahead.  Dreams often reveal the hidden rooms of our soul and invite us inside for exploration.