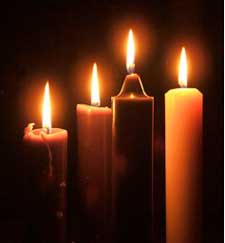 Next Sunday, Dec.  20th, is the Fourth Sunday of Advent. The Sunday readings will be taken from Cycle C featuring the Gospel of Luke, and the daily Mass readings from Year 2.

Don't forget to announce the Christmas Mass schedule this weekend.  It may also be worth reminding parishioners how busy and chaotic the first Christmas Eve Mass can be and to seriously encourage them to consider one of the other Masses, especially those of Christmas Day.

The season of Advent focuses on  preparing for the three "comings" of Christ: Christ who came once for all in history at Bethlehem, Christ who will come again at the end of time as judge and ruler, and Christ who comes now in the present, in our lives, and as our food for the journey in the Eucharist.  The season of Advent is divided into two parts: from the first Sunday of Advent until the 17th of December, when the Church's liturgy focuses primarily on being watchful and ready for  the second coming of Christ in glory, and in his present coming in our world, and then from the 17th of December until the Christmas Eve Masses, when the Church's liturgy focuses on getting ready for the  first coming of Christ at Bethlehem which we recall at Christmas. It is most appropriate to refrain from using the O antiphons (on which "O Come, O Come Emmanuel") is based until the second part of the season of Advent, from December 17-24th, since each of the verses of "O Come, O Come Emmanuel" is one of the antiphons from Evening Prayer for each of those seven days.

Here are a couple of great websites to learn more about Advent from Creighton University and from the USCCB.

The Center for Liturgy at St. Louis University

The Text This Week