The Poor Will be Glad 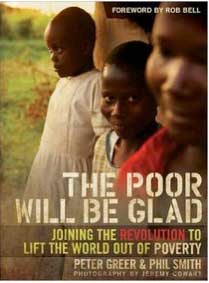 Peter Greer is the kind of smart young evangelist the world needs today. He's willing to borrow the best ideas wherever he finds them to help families and repair God's world.  He earned a Master of Public Policy degree from Harvard's Kennedy School and currently is the president of HOPE International, a global faith-based microfinance organization serving hundreds of thousands of entrepreneurs in 14 countries.

Greer is a Christian borrowing a concept developed by Muhammad Yunus, a Muslim from Bangladesh. Yunus now has won both the Nobel Peace Prize and an American Medal of Freedom this year at the White House.

Of course, radical redistribution of resources dates back to ancient Judaism and early Christianity as well. But, now, the refined "microfinance" concept is globally celebrated as a set of principles Yunus proved can transform entire communities. Yunus also demonstrated that microfinance isn't merely charity -- it also makes solid sense as a business-development strategy in impoverished areas.

Now, Peter Greer, co-author Phil Smith, and Zondervan are bringing a full-scale version of microfinance to thousands of Christian congregations in The Poor Will Be Glad: Joining the Revolution to Lift the World Out of Poverty.

HIGHLIGHTS OF OUR CONVERSATION WITH PETER GREER:

David: Peter, I want to start today by sharing with our readers from the introduction by Rob Bell that opens your new book. I've had the opportunity myself to visit Asian countries, including Bangladesh, where microfinance is changing lives. But, it's hard to appreciate this idea unless readers understand the dramatic stories we've all seen.

Rob writes: "In 2004 I was at a market in Rwanda, watching a woman run her stall. She was selling things and interacting with people, and the whole time she had this huge smile on her face. Someone explained to me that not long ago, this woman had nothing. No food for her family, no home, no money for school for her kids -- nothing. She was given a loan as part of a microfinance program. With it she started her business, paid back the loan, built a home that she has no debt on, and now sends her well-fed kids to school. No wonder she was smiling.

"I asked her how much the loan was for: 'Forty American dollars.'

Well, Rob certainly "got it," and I "got it," too, while traveling through Asia -- and you run an entire global nonprofit with thousands of people whose lives have been changed by this idea.

Do you think this idea stands a chance of sweeping through Christian churches?

Peter: I hope so, but many people still haven't heard about microfinance. When I talk to new groups about my work at HOPE International, I can't assume that they understand what we do. So, I usually start by describing the concept of microfinance to them. I explain that, around the world in developing countries, many families have been dependent on charity for a long time. For many of these families, microfinance is an opportunity to transition beyond charity to permanently help their families. Then, I explain that my own organization, HOPE International, is a Christ-centered microfinance organization.

I do believe we need to expand the ways we help people get out of poverty. Rather than just showing up as the heroes with handouts -- for many people, microfinance can put their own solutions into their own hands.

David: I know that you're working in 14 countries right now. How many people are directly using these resources through HOPE around the world?

Peter: We're currently working with 250,000 entrepreneurs around the world. We're quite active in Sub-Saharan Africa and in Haiti, Afghanistan, Ukraine, Russia, and China.

David: I can't emphasize strongly enough how smart it is to partner with a broad range of groups in this kind of work.

You're very clear in your book that this can be a "Christ-centered" mission for Christian churches. You're a devout Christian yourself. As a Christian, you're showing the compassion and commitment of your faith every day in the field.

But, if I read your book correctly, you're saying that we also should reach out cooperatively in these efforts. If it makes sense for Christians to work with Muslims somewhere, then that's the wise choice, for example. When I began reading your book, I did wonder whether you would properly credit Muhammad Yunus in your book. I was pleasantly surprised that you do, indeed, credit him both in this book and in your HOPE International website.