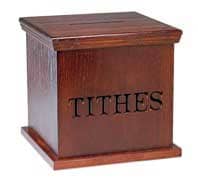 I think I'm ready to steal tithes from the Church.

I'm only thinking about the idea of tithes, mind you -- Pagans and Christians have a long tradition of sharing ideas, and I'd like to put this one on the Mantle of Good Ideas alongside "seminary" and "Christmas carols."

A wise man once said to me, "Anybody can save ten percent." A longtime Boy Scout leader and surrogate father to countless boys, he explained to me that saving is all relative. The poorest of the poor could learn to scrimp by doing without one penny in ten and not notice the difference, just as the stratospherically wealthy could. In fact, income being no measure of financial management skills, some of the wealthy would have a tougher time of it.

Another man whom I admire is Albert Einstein. It's hard not to look up to a man who owned a set of identical suits so he wouldn't have to waste time deciding what to wear. I don't even know if Einstein said it, but he is often quoted as remarking that compound interest is either the most powerful force in the Universe or the most powerful human invention. Einstein was a smart enough man that he probably could have said all sorts of wise things that he never did, so I've always taken it on faith that, at the very least, he would have agreed with the sentiment.

Anyone can save ten percent. Compound interest is an immensely powerful force. And, lest I forget, money is congealed energy. I think these ideas can be molded into a tithing model that fits the Pagan worldview.

Where would I pay a Pagan tithe?

Pagans are a self-determined lot. Even large, organized Pagan groups tend to cluster off into smaller covens and circles. We move from one group to another as circles dissolve and new covens are born. Our legally-recognized churches aren't known for opulent sanctuaries built as a tangible acknowledgment of the love we feel for our gods. The structure we've created really isn't conducive to passing a collection bowl around and using the proceeds to run a methadone clinic. Who's going to be responsible for the money we collect, and decide how to use it?

How is a Pagan tithe spent?

Covens, groves, and solitaries should make those decisions. Who better to make sure that the money is used appropriately? Just setting aside that ten percent in a separate account is a victory, though; that's a step toward controlling the flow of money. The larger the amount that's saved, the more impact those decisions can make. The possibilities are boundless:

Just don't spend the money on anything without thought. Not everyone would want to spend their tithe promoting industrial hemp, but as long as you feel dollars thus spent will improve the world, it's appropriate.

Pagan tithing should be as individual as Pagans, but that doesn't mean it can't make a big impact on our world.

Terence P. Ward is a freelance writer living in the Hudson Valley area of New York State.  His spirituality and environmentalism were cultivated through many years of backpacking. His blog, Pagan Filter, can be found at http://www.paganworldview.blogspot.com.