What Made Scrooge Scrooge? 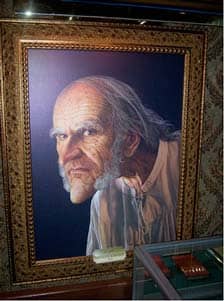 If you call somebody a "Scrooge" today, everybody will know what you mean. You're implying that someone is miserly, grumpy, and selfish, especially but not only during Christmastime. In fact, the name "Scrooge" comes from a once-used verb "to scrooge," which meant "to squeeze." The first description we get of Ebenezer Scrooge in A Christmas Carol fills out this implication:

Oh! But he was a tight-fisted hand at the grindstone, Scrooge. A squeezing, wrenching, grasping, scraping, clutching, covetous old sinner! Hard and sharp as flint, from which no steel had ever struck out generous fire; secret, and self-contained, and solitary as an oyster.

Soon I want to examine what made Ebenezer Scrooge change from being, well, Scrooge, to be a generous man who loved both people and Christmas. But before I get to this, I want to consider what turned the human begin named Ebenezer Scrooge into the archetypal mean-spirited miser.

I realize this question is more of a 20th- or 21st-century question than a 19th-century question. It's only been in recent times that we've become fascinated, one might say obsessed by, psychological causes of behavior. Yet, even though Charles Dickens didn't supply a lengthy biography of Scrooge, we can nevertheless discover some of what made him the man he became. This knowledge may also help us to understand what unmade him and remade him.

Most of what formed the soul of Ebenezer Scrooge appears in Stave 2 of A Christmas Carol, when the Ghost of Christmas Past shows Scrooge images of his past experiences. The very first view of the younger Scrooge comes as he sits alone in his boarding school on Christmas Eve. He is "a solitary child, neglected by his friends." Seeing his young, abandoned self, the grown up Scrooge sobs with a peculiar kind of empathy. The only joy in this lonely boy's life comes from fantasy books.

In the next scene from Scrooge's past he is once again abandoned by the other boys who had gone home for Christmas. But this time Ebenezer receives a surprise visit from his sister, Fan. She brings the good news that Ebenezer will be coming home for Christmas, and even beyond. Here's a bit of the dialogue:

"Yes!" said the child, brimful of glee. "Home, for good and all. Home, for ever and ever. Father is so much kinder than he used to be, that home's like Heaven! He spoke so gently to me one dear night when I was going to bed, that I was not afraid to ask him once more if you might come home; and he said Yes, you should; and sent me in a coach to bring you. And you're to be a man!" said the child, opening her eyes, "and are never to come back here; but first, we're to be together all the Christmas long, and have the merriest time in all the world."

In this short paragraph we learn some crucial facts about Ebenezer Scrooge's sorry childhood:

These bits of data begin to explain why Scrooge became Scrooge. But the next scene in Scrooge's past shows that he hadn't been completely corrupted by his difficult childhood. In this scene he is serving as an apprentice for a fun-loving, generous man named Fezziwig. Ebenezer appears to have thrived under Fezziwig's tutelage, and also had been close to his fellow apprentice, Dick Wilkins. We have no hint of the selfish, Christmas-hating man whom Scrooge became.

Yet something happened after Scrooge's apprenticeship under Fezziwig that changed his heart for the worse. We learn this from the next scene in Scrooge's past. There his fiancée informs Ebenezer that she is to break their engagement. Why? Because "another idol has displaced me," she explains. And this idol is "a golden one," which Dickens calls "Gain" and we would call "Greed." The dialogue continues:

[Scrooge says,] "There is nothing on which [the world] is so hard as poverty; and there is nothing it professes to condemn with such severity as the pursuit of wealth!"

"You fear the world too much," she answered, gently. "All your other hopes have merged into the hope of being beyond the chance of its sordid reproach. I have seen your nobler aspirations fall off one by one, until the master-passion, Gain, engrosses you. Have I not?"