By Rev. Robert A. Sirico 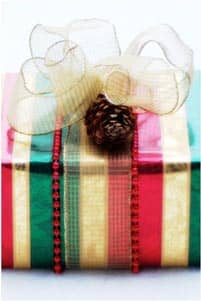 This is the time of the year when almost everyone has gift-giving (if not gift-getting) on the mind. We also hear the usual series of warnings against making Christmas too materialistic. That is, of course, completely appropriate when animated by a desire to remind us of the belief that "veiled in flesh" it is the Godhead we see -- as one of the more theological carols teaches us. But when some people imply that buying or giving gifts is somehow sinful and goes against the spirit of Christmas, this is another matter all together.

After all, the tradition of gift-giving is rooted in the gift that God offers to the world in his Son who comes in the appearance of a frail babe. Likewise, the Magi, the Wise Men, who came from the East, brought the Christ-child exotic gifts to celebrate his Advent.

There is another, perhaps more practical aspect of the giving of gifts that is worth pondering, which was brought to the fore by Arthur Brooks, author of the 2006 book Who Really Cares: America's Charity Divide - Who Gives, Who Doesn't, and Why it Matters. Brooks investigated the American habit of giving and what he found surprised some, irritated others, and confirmed some suspicions that I have had for some time. Among his findings was that the general profile of the gift-giver is one who has a strong family life and who attends church regularly.

Yet, there is another aspect to Mr. Brooks' research worth noting, especially at this time of the year and in the midst of these troubling economic times. At a recent conference in Rome, Brooks said that his research revealed that "when people give they get happier, and when they get happier, they are more productive and become richer."

Brooks, who will shortly become the new president of the Washington-based American Enterprise Institute, contends that there is a kind of interconnected relationship between generosity, prosperity, and happiness.

Now, no sensible person would encourage people to become generous with what is not theirs; certainly it is no virtue in buying things for others that we ourselves cannot afford by going into debt in order to be generous. But to have a general spirit of gratitude for the innumerable gifts that surround us, yes, even in these difficult and uncertain times, is to increase a positive sense of the world. In this we see a hopefulness of spirit, which in turn enables us to look about us and see the great potential that the world holds in store if we will only keep our eyes open.  And isn't this what we celebrate in the days leading up to Christmas as we wait in hope for Redemption.

On a more sublime level, we look for that which gives ultimate meaning to our existence, which is never merely material; the light in the midst of the darkness that penetrates our world -- and our souls.

The words of the well-known prayer of St. Francis, that in giving we receive, have been confirmed by the social sciences. Of course, St. Francis was way ahead of us all, wasn't he?

This article was first published by the Acton Institute and is reprinted with permission.

Rev. Robert A. Sirico is president of the Acton Institute. Fr. Sirico lectures at colleges, universities, and business organizations throughout the U.S. and abroad. His writings on religious, political, economic, and social matters are published in a variety of journals, including: the New York Times, the Wall Street Journal, Forbes, the London Financial Times, the Washington Times, the Detroit News, and National Review. Father Sirico is often called upon by members of the broadcast media for statements regarding economics, civil rights, and issues of religious concern, and has provided commentary for CNN, ABC, the BBC, NPR, and CBS' 60 Minutes, among others.