A Decade for Documentaries 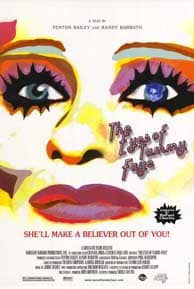 One of the first religious documentaries of decade, The Eyes of Tammy Faye, directed by Fenton Bailey and Randy Barbato, focuses on the (in)famous rise and fall of Jim and Tammy Faye Bakker, the couple responsible for nearly every major network and program in Christian broadcasting.  Victims of their own fame, Jim Bakker could not manage the growing million-dollar-a-day ministry that he had founded.  Tammy Faye suffered not only the similar stress, but a cheating husband.  Though they lived and worked in a very conservative religious/theological environment, the Bakkers were also very progressive and prophetic, a welcoming voice for members of the gay and AIDS communities, communities who would also return the favor to Tammy after her virtual exile from the conservative Christian broadcasting community.

Directed by George Ratliff, Hell House goes behind the scenes of events that take place at conservative, evangelical Christian churches across the Southeast.  Every Halloween, instead of tricks and treats, many churches host Hell Houses, transforming their facilities into giant morality plays that warn of the threats of hell and the promises of heaven.  These are increasingly gruesome and disturbing, drawing on the fears and terror of hell to scare viewers into heaven.

Devil's Playground, directed by Lucy Walker, takes as its subject the Amish tradition of Rumspringa during which Amish teenagers are given the freedom to temporarily leave the community and experience the outside life, or as they call it, to live English.  Church-sanctioned hedonism, the teenagers drink, party, do drugs, have sex, dress English, and live on their own.  Rumspringa can last anywhere from a few weeks to several years until the teenager decides to return to the church or remain apart.  At the end of this "religious spring break," the person can return to the community, where they remain for life, but if they choose to leave after making that decision, they can no longer return.

In 1984, German filmmaker Philip Groning wrote to La Grande Chartreuse monastery in the French Alps to get permission to make a documentary of the Carthusian monks there. Sixteen years later, they contacted him and told him they were ready. Groning shot for six months without a crew or any artificial lighting, and the result is Into Great Silence, a two hour and forty minute documentary of almost pure silence.  The documentary encourages viewers to pause and reflect on their own lives and how they too might be an "eternal prayer."  Watching this film requires something akin to spiritual and mental preparation. It offers a quiet space for reflection and meditation during the film rather than afterwards.