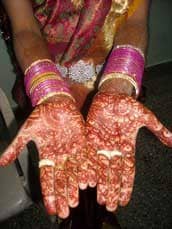 "He is educated, Mashallah... a lawyer, and the age difference is just right. I talked to his mother, too. She was absolutely delightful, she agreed with me on everything! She is sending his picture through the e-mail right now." Barely able to contain her excitement, my mother grabs her reading glasses and positions herself before the monitor. It is the Moment of Truth.

As we wait for what could be a life-changing email, I start to imagine what this lawyer might look like. Could there be a possible mix of Will Smith and Bollywood actor Shah Rukh Khan? I wonder if he has any acting skills. I just pray that he has a personality.

After refreshing the page at least twelve times, the e-mail appears before us. "Well, go on! Open it! Ya Allah, please let this be the one!"

Not at all feeling the pressure now, I open the e-mail and... silence.

For two long minutes, my mom stares at the picture. Then she walks away.

A minute later, she comes back with my Dad. Now both stare at the screen for what seems like eternity.

Finally he speaks: "Rung kum hai." He is dark.

But attractive, I think to myself.

Now that his "true color" has been revealed, his prestigious legal profession and even the agreeable mother-in-law suddenly do not matter any longer to my parents. This is the last I'll see of a guy who might have been interested in Lakers basketball or Feng Shui as much I am. I'll never know.

Sadly, this is not the first time that a suitor has been rejected because of the color of his skin.

There is something odd about the tendency of South Asian culture to prefer lighter (okay let's be honest white) skin color, despite centuries of movements to remove imperialist rule and philosophy that favored racist mentality. Amazingly, illogic prevails.

Growing up with these contradictions in the background, I can recall many episodes in my life that could easily have instilled in me the values of seeking out white. Even the Urdu phrase used above, Rung kum hai, literally translates to "lack of color," which could mean light or white (and thus would appear agreeable); but conversationally, it is used to describe a person who is full of color, or dark.

The mis-education starts from childhood. I often hear my family talk about how gori, or white, I was at birth, and that after I was exposed to sunlight (apparently an avoidable circumstance), I never regained my original and "normal" color, a bleach white. Once, I begged for a Black Barbie because she came with the outfit I had seen on TV. After a near tantrum in Aisle 2 of Pic ‘N' Save that day, I went home with yet another Caucasian Barbie doll. "Beti, she is prettier." And during those hot summer days, while all my friends were in the swimming pool, having the time of their lives playing Marco Polo, I couldn't get in the pool until sunset so that the fear of the "dark plague" would subside.

With Bollywood films as a major source of cultural education in my teen years, I often noted that the lighter-skinned actress played the coveted role of the heroine, while the darker one was the sidekick who never even had a chance at love. As a twelve-year old, my eyes focused on the light-skinned heroine. Meanwhile, the backup dancers disappeared into the background, to their rightful place as dark, never-to-be-loved creatures of the night. Mission accomplished?

Searching for rationalization, success appears to be linked to a notion of beauty that emphasizes color. Now, if one attempts to rationalize through the Islamic framework, there really is nothing rational about color bias. The beauty emphasized by Islam is its universality, inclusiveness, and colorblindness. Islam reveres intentions and good deeds, not looks. Yet here I am, immersed in a culture focused on just that. Living through this dichotomy is painful, but becomes unbearable when those who share my faith knowingly submit to a contradictory and divisive philosophy.

Sometimes I find myself unconsciously dismissing a potential spouse because of the color issue. When I get ready to go outside, I can't help but think that my SPF 55 Sun Tan Lotion may do more than just protect me from harmful rays -- it'll maintain my color. Sometimes I get so caught up in this color obsession, that I feel lucky that I am of a lighter shade on the color spectrum. Such are the foolish thoughts that come to reside in one's head after years of conditioning.

It's difficult to change the ways and beliefs of generations old. However, as the Muslim community here in the United States is in many ways compelled to experience the diversity that is a true testament to the type of community envisioned in Islam, and is in a position where it must set out to correct myths, biases, and stereotypes about Islam and Muslims, we need to first reject internal biases that contradict the very core of the struggle that people of color have faced for generations: the struggle for acceptance.