Jesus called his disciples to him and said, "I tell you the truth, this poor widow has given more than all the others who are making contributions." (Mark 12:43) 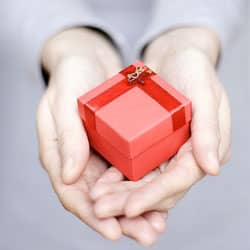 As I write this Reflection, the people of Haiti are in dire straits as a result of a major earthquake that rocked their nation. As often happens in a tragedy like this, the American people have responded to the Haitian crisis with open hearts and open wallets. Many stars have given substantial personal gifts. Sandra Bullock gave a million dollars to the cause. Dozens of major corporations have given generously. Experts are saying that the total amount of charitable giving to Haiti may exceed the previous record of money donated to hurricane relief in the United States, totaling several billion dollars.

Such generosity is laudable and speaks well of the American character. But it also can leave many of us feeling as if we don't really matter. My own gift to Haiti relief, to be honest, seems like less than a drop in the bucket. I know in principle that it will make some small difference. And I know in principle that many small gifts add up to something substantial. But in light of headlines celebrating the huge contributions of others, my own contribution can feel tiny and virtually inconsequential.

If you are giving to God's work, whether in support of your local church, or earthquake relief in Haiti, or mission efforts in far-away places, Mark 12:41-44 offers a strong word of encouragement. As Jesus watched people giving their benevolences to the Temple ministry, he saw rich people making a show of their generosity. They gave grand gifts in a grand way so people would take notice. But then, by way of contrast, "a poor widow came and dropped in two small coins" (12:42). The King James Version renders this memorably, "she threw in two mites, which make a farthing."

In economic value, the widow's gift was tiny. But Jesus saw it from a different perspective: "I tell you the truth, this poor widow has given more than all the others who are making contributions. For they gave a tiny part of their surplus, but she, poor as she is, has given everything she had to live on." Jesus esteemed not the monetary value of her gift, but its relative value and what that meant. The poor widow gave sacrificially, reflecting her extraordinary commitment to the Lord. Thus, in effect, she gave even more than the rich people had.

No matter our means, we are all called to give generously, even sacrificially, to the work of God. Some of us with great means will give numerically great gifts. Those of us with lesser means will give less in an absolute sense. But God sees the true measure of our generosity. So, no matter how much you might have, let the example of the widow and her "mites" be an encouragement to you today to open your heart and your wallet to the Lord and his ministry.

How do you feel about your own giving? Are you generous with what God has given you? Why or why not? How do you respond to the example of the widow and her "mites"?

O Lord, I know that I, when compared to all of the people on this earth, stand among the wealthy. How I thank you for the financial blessings you have given me!

Yet there are times when it seems as if my charitable contributions make such a small difference when compared with rich stars and giant corporations. When I feel inconsequential, I am inclined to hang onto what I have rather than sharing it. Forgive me, Lord, when I am not a faithful steward of the resources you have entrusted to me.

Thank you for the example of the widow and her "mites." May she inspire me to give as I am able. Help me, Lord, to know what it means for me to give generously and sacrificially.

Finally, dear Lord, I ask that your grace and mercy be poured out upon the people of Haiti. Comfort those who have lost so much. Empower those who are there to help. In particular, inspire and strengthen your people in Haiti, so that they might share your love with their fellow sufferers. Amen.

Mark D. Roberts, as Senior Director and Scholar-in-Residence for Laity Lodge, is an advisor and frequent contributor to TheHighCalling.org. A Presbyterian pastor, Mark earned his Ph.D. in New Testament from Harvard University. He has written six books, including No Holds Barred: Wrestling with God in Prayer (WaterBrook, 2005). He blogs daily at www.markdroberts.com, and the meditations he writes for The High Calling are featured on Wednesdays at the Evangelical Portal and Mainline Protestant Portal.