Consider this example (adapted from a true story): 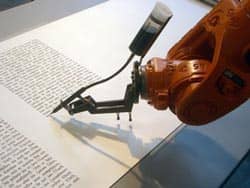 Greg Jones was an evangelical Christian, a regular preacher and teacher, and a servant on the elder board of his church. He says, in retrospect, that he was "addicted to fundamentalism." He slept, ate, and drank the truths of Christianity. After a decade of faithful service to the church, he is now a professing atheist who rejects the naïveté of all that he once held so dear. Why? Well, as he tells the story, he was awakened from the slumber of fundamentalism through numerous encounters with "the truth." Chief among the "truths" he encountered was that the Bible was "full of errors." He describes his turn away from Christianity with reference to discrepancies he found throughout Scripture and his own inability to reconcile them. "For years," Greg says, "I was the best in the room at answering the skeptic's objections against the Scriptures. I knew how to reconcile any supposed contradiction. It became like an art form that I was proud of. No matter how difficult the problem, I could find a way out. After a time, I don't know why, but I began to reflect upon the lengths that I had to go to make it all fit together. I realized that the art of answering the contradictions became a subjective smokescreen that I raised not only to those I was responding to, but also to myself. I had to be honest with myself. The First [?] Letter of John says that "No one who is born of God sins," but then it turns around and says "If anyone sins, we have an advocate with the Father." Which one is it? There are literally hundreds of problems like this in Scripture. My answers may have satisfied those I taught, but they no longer satisfied me. Eventually I realized (sadly, I might say) that I had to let go of the inerrancy of Scripture. Once I did that, I had to let go of Christianity all together."

This account is a common testimony of many who have walked away from the faith. But my concern at present is not the phenomenon of losing faith, but the danger of the doctrine of inerrancy. When Greg rejected the doctrine of inerrancy because of his inability to reconcile the discrepancies, did this necessarily mean that he had to jettison the Christian faith as a whole?

Here is the question: Is the doctrine of inerrancy so central to the Christian faith that if a person were to deny it, he should pack his bags and search for a new worldview? In other words (and let me be very clear): if the Scriptures are not inerrant, does that mean the Christian faith is false?

I personally hold to the doctrine of inerrancy. I call my view "reasoned" inerrancy, since it does not presuppose a particular wooden hermeneutic to be tied to it. (You can read more about it here).

Nonetheless, I believe that this (important) doctrine is not the article upon which Christianity stands or falls. I believe that the Scriptures could contain error and the Christian faith remain essentially intact. Why? Because Christianity is not built upon the inerrancy of Scripture, but the historical Advent of Jesus Christ, the Son of God. Christ became man, lived a perfect life, died an atoning death, and rose on the third day not because the Scriptures inerrantly say that these events occurred, but because they did, in fact, occur. The truth is in the objectivity of the event, not the accuracy of the record of the event. The cause and effect must be put into proper place here. The historical event of the incarnation caused the recording of Scripture, Scripture was not the cause of the events. Christianity is founded upon the Advent, not upon an inerrant record of the Advent.

Consider this: Do we only trust the historical records of those accounts that have an inerrant witness? Are the ancient histories inerrant? I have never heard anyone say that Polybius (c. 200-after 118 B.C.E.) was inerrant in his records of Roman history; yet we treat him as generally reliable. Josephus (37- after 93 C.E.) is seen as a generally reliable Jewish historian, but not inerrant. Are modern historians required to establish their inerrancy before they are approved to write textbooks for our children? Of course not. Why? Because it is well accepted that a person can give an account that is not inerrant, but is reliable and truthful. What if we followed the example set by Greg in the above story? If we rejected every historical account that included the slightest discrepancy, we would be completely agnostic to all of history.