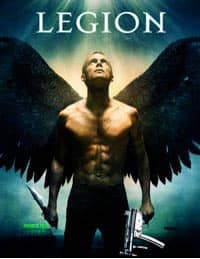 I won't beat around the bush.  Legion isn't very good.  There's really no justification for charging audiences a fee to see it.  But when it lands on late night cable TV -- and it will -- you'll enjoy its special effects, huge guns, theological ambitions, and the appealing performances of its stars.

Imagine a decrepit rest stop on a forgotten American highway somewhere in the Mojave Desert.  Give it a big neon sign that reads "Paradise Falls."  The date is December 23.  A single strand of Christmas lights blows in the dust.  This place looks long deserted.  The gas pumps haven't been updated in decades and the diner's siding badly needs a paint job.

But there's life inside that diner.  Cranky and bitter owner Bob (Dennis Quaid) struggles to get It's a Wonderful Life on his old TV while short-order chef Percy (Charles S. Dutton) tosses out affectionate insults.  Charlie (Adrianne Palicki), the diner's unwed and very pregnant waitress, is petted and protected by the much older Bob and Percy, and Bob's son Jeep (Lucas Black) is out in the garage restoring an old baby crib.  It's a patchwork family, to be sure.  They've each had more trouble than luck.  But they have each other.

The only customers to find this place are those who get lost, like Kyle (Tyrese Gibson), and a So-Cal family with a broken-down Beemer.  They languish in the dusty emptiness, waiting for a bite to eat, and waiting to get back on the road.  The day before Christmas Eve feels like any other day: unpromising, and routine.

But then a new customer, a little old lady with little sharp teeth, insults the women, scurries across the ceiling, threatens them all with hellfire, and rips the throat out of Beemer Dad.  Out come the guns (this is America after all), and between Bob's sawed-off shotgun and Kyle's enormous automatic pistol, the demon lady is killed.

Their sense of normalcy thus shattered, the motley crew of Paradise Falls receives a visit from a mysterious stranger.  Riding into the diner's parking lot in a stolen police car, the Archangel Michael (Paul Bettany) begins unloading an arsenal of powerful automatic weapons.  He urges everyone to hurry inside.  There isn't much time.  "It's started," he says.

What's started?  You might expect the end of the world when demons and archangels show up, but this is no apocalypse.  This is something much more final.  God has at last grown sick of humans, and ordered his legion of angels to kill every last one of us.

If all of humanity is facing death, why is the Archangel Michael at the Paradise Falls rest stop?  Michael, defying God, has come to protect Charlie's unborn child, because that baby possesses the potential to lead humanity from darkness into light.  God wants that baby dead.  Not only does He want humans exterminated, He wants to destroy even a faint hope of redemption.

Or does He?  In the midst of the movie's wave upon wave of loud gun battles between hordes of angels and Paradise Falls' small but very determined resistance, Legion weighs three rather interesting theological questions.  Why would God want us all dead?  Does God truly know what He wants?  And what is the duty of an Archangel?

I'll leave the second two questions alone so that I won't spoil the movie for you.  Those two questions contained the movie's rather original, if not head-scratching contribution to the complicated, millennia-old conversation concerning God's attitude toward His children in light of our shortcomings and sins.

As for the first question, the movie's views are consistent with the first story of God's determined extermination.  In the story of the flood told in Chapters 6-8 of Genesis, we learn that God regretted making us, because we turned out to be so wicked.  We had corrupted the earth, and filled it with violence (Genesis 6:11).

The LORD saw that the wickedness of man was great in the earth, and that every imagination of the thoughts of his heart was only evil continually.  And the LORD was sorry that he had made man on the earth, and it grieved him to his heart.  So the LORD said, "I will blot out man whom I have created from the face of the ground..."  (Genesis 6:5-7)