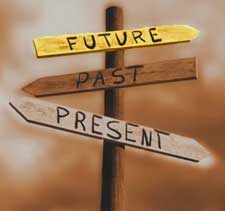 It's hard to turn on the TV or open a newspaper this time of year without encountering a summary of major events or news stories from the past year-or the past decade (even though, strictly speaking, the current decade doesn't end for another year). It's no different when it comes to religion: across the media landscape, stories look at back at major religious events and ideas, and look ahead toward what may lie in store for 2010 and beyond. Click on the links below to read:

At the left-leaning religion-news-and-commentary site ReligionDispatches, Lauri Lebo looks back at the top religion and science stories of 2009, while Louis Ruprecht considers the "place of religion in the twenty-first century so far."

PBS' Religion & Ethics Newsweekly summarizes the past year in a brief video, while editor Kim Lawton and other panelists discuss stories they expect to cover in 2010 in an extended roundtable discussion. Interviews with faith leaders and scholars look ahead at emerging trends in various religious communities.

A BeliefNet slideshow remembers spiritual leaders who died in 2009, while another slideshow features the "Ten Religious Pop Culture Trends of the Decade."

Numerous religious and secular groups have compiled lists highlighting major events from the past year.

Scientology's Year in Review focuses on new church openings in the U.S. and around the world.

The biggest Vatican stories of the decade are detailed at the blog of the National Catholic Reporter.

The Newsroom of the Church of Jesus Christ of Latter-day Saints (Mormon) lists top news stories.

The Secular Coalition for America reviews its past activities and previews future efforts in its 2009 report.