Love Enough to Get Involved 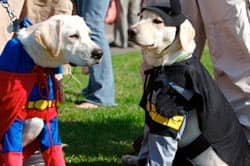 One night, my wife and I were watching 101 Dalmatians on the television with our Boxer.  In spite of all the stresses and strains he endured as the Lord of the Nile, or perhaps because of them, Ramses the Great enjoyed watching television with us, especially animal shows.  But it was just an ordinary evening, and we gave no thought to how Ramses might take a special interest in our viewing selection that night.

In the movie, when it is learned that the Dalmatian puppies are missing, the full-grown dogs begin to howl.  The distress call spreads from house to house, from backyard to backyard, until the entire canine population of London is sounding the alarm.  At this point, Ramses leapt to his feet and darted in front of the television, coming to a stop with his black nose mere inches from the screen.  He stared intently, his tail-stub and ears perked upright.  After a few seconds, he ran onto the deck outside and, for ten seconds, raised his royal voice and howled as well as any Boxer could.  Then he ran back into the living room to listen again to the doggie howling on television -- as though to listen for the rest of the message -- and then he ran back outside once more to relay the call for help.

I have often wondered what Ramses was thinking at that moment.  I like to think that there was some kind of "dog language" that he understood.  The doggy howl comes from its wolf ancestry, and wolves use howling to communicate over long distances -- to find one another, to warn one another, to keep one another safe.  Ramses perceived that there was a need, that there was cause for concern, and he leapt immediately to answer the call.

What do we do when we hear the call to help?  If I am confronted by a person in need -- say, a homeless man asking for money, or a man whose car has broken down by the side of the road -- my first reaction is to evaluate the person.  Especially with the homeless man, I ask myself whether he seems ‘worthy' of my assistance, or whether instead he is a freeloader who lives off the naïveté of others, or would use my money to perpetuate his drug addiction.  My second reaction is to assess the safety of the situation.  By helping this person, would I endanger myself or those who are with me?  By the time I've thought through these two issues, if I am lucky (or so I think), the homeless person has moved on, or I have driven past the man with the broken-down car.  "It's too late now," I tell myself.  "Oh well."

What if God had used the same criteria when determining whether to help humankind.  Were we "worthy" of help?  As Romans 5:8 says, "God demonstrates his own love for us in this: while we were still sinners, Christ died for us."  There was nothing worthy about us.  What we deserved was condemnation; what we received was reconciliation.

So if God had acted like me, according to my own criteria, he would have rejected me on the first count.  I deserved judgment and not goodness.  But the contrast is even stronger.  Was it ‘safe' for God to get involved?  Consider the scars on Jesus' body, consider his three days in the tomb, and ask him how ‘safe' it was.  Ask Jesus what it cost.

Love is costly.  It asks what the beloved needs, not what he deserves.

The root of the problem, at least in my case, is a shortfall of love.  Of course I can justify my actions analytically, and dress it up as a careful analysis of the situation.  However, if I loved that person like God loves him, wouldn't I help?

Perhaps the homeless man needs food and not a dollar.  Perhaps he needs conversation, and not a quarter.  But do any of us really believe that Jesus would simply walk on by?

How about you?  Do you love enough to get involved?