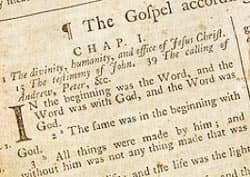 Recently, I reviewed the May 4, 2007 LDS Church statement that gave the news media and members guidance on how to interpret what constitutes doctrine of the Church of Jesus Christ of Latter-day Saints. Amongst other assertions, the statement indicates that statements made by General Authorities (i.e. the First Presidency, Quorum of the Twelve Apostles, and a few other offices in the LDS Church) on single occasions are not meant to be binding.  The statement helpfully narrows the scope of where media and members should search for doctrine: "With divine inspiration, the First Presidency... and the Quorum of the Twelve Apostles... counsel together to establish doctrine that is consistently proclaimed in official Church publications. This doctrine resides in the four ‘standard works' of scripture (the Holy Bible, the Book of Mormon, the Doctrine and Covenants, and the Pearl of Great Price), official declarations and proclamations, and the Articles of Faith."

I take this statement to mean that doctrine is what is consistently proclaimed in church publications (although I am not quite sure what counts as an official publication) and what resides in the texts mentioned above.  In general, I find this statement helpful and appreciate the limits placed on what counts as binding doctrine.  But, as a thought experiment, what are the consequences of narrowing the scope of doctrine to what is consistently claimed in church publications?

In order for something to be consistently proclaimed in church publications, the claim must be made repeatedly over (an unspecified amount of) time.  This fact makes me wonder if one consequence of narrowing where to look for doctrine is that members might be inclined to give less weight to current statements by the prophet and other GAs and perhaps undue weight to statements that have been repeated throughout history.  Of course, this consequence is part of the point -- it might be unwise to take any given pronouncement by a GA too seriously.  But it does seem to place more weight on teachings that have a history than on new revelations or messages that might come, and it leaves open the question of when something is said consistently enough to be elevated to doctrine -- or when it ceases being repeated so as to perhaps not be doctrine?

Perhaps more interesting to me is that the statement emphasizes that doctrine is proclaimed consistently in official church publications.  Part of the reason why certain statements have been consistently repeated in the past is that they were published in a book form during a time in which most members had the same books in their shelves, because books were expensive, harder to update than in digital printing, and because few media outlets existed where people could turn for other reading material on Mormonism.

In other words, the nature of former models of print publishing means that as a group we are far more likely to be familiar with and to continually cite statements from older books published when audiences had fewer choices.  Since media is now far more fragmented and there is even a wide array of official church publications, it seems less likely that we will all hear the same messages. In other words, it seems plausible that the requirements and business of print publishing might have caused certain statements to enter into doctrinal texts and culture and to gain more current weight than might be warranted.  Does this at all trouble the idea of looking at what is consistently proclaimed in official publications for doctrine?

Finally, what burdens does it place upon lay members of the LDS Church as readers if doctrine is to be found by looking for what is consistently proclaimed in official church publications?  Should we be reading for trends, empirically studying what is most frequently expressed in official publications, since whether a statement is doctrine or not rests in part on how many authorities said something over a span of time?  Should we be making more of an effort to read broadly over the many kinds of official publications now released, since otherwise we might miss these trends? Should we complain less about repetitive talks, since apparently repetition gives statements doctrinal weight?

Natalie B. is a blogger at By Common Consent, where this post first appeared.  She has degrees in English literature, and is now attending law school.  In her free time she enjoys baking, board games, and addictive television shows.