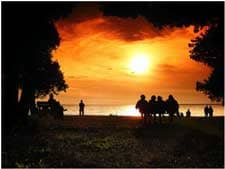 The sun was low in the sky as we gathered around the fire circle. Many of us were strangers, but we came together in the woods to celebrate Mabon as a community. The circle was already laid out and lit with large candles glowing in the dim light of sunset. Each quarter had its own altar. North was decorated in brown, East in pink, South in red, and West in blue. The center altar was large with black, white, and red cloth draping down onto the grass. A large multi-tiered candleholder was center and lit with several white candles. On either side sat statues of the God and Goddess nestled in several colorful flowers. The ground in front of the altar was heavily decorated with loaves of bread, flowers, and branches.

We were lead into a semi-circle around the fire by one of the apprentices. We had not yet seen the priestess so far. Her apprentices were running everything. As the chanting began and became harmonious, we heard a stunning voice come from the eastern side of the circle. She sang in harmony with our chant. We chanted, "Isis, Astarte, Diana, Hecate, Demeter, Kali..." She accompanied us with powerful and beautiful voice singing, "Sacred Mother I hear you calling, Sacred Mother I hear your song..."

The power of this song and chant was amazing. I was blown away! It was creative, powerful, and magnificent. As the Priestess entered the circle, the apprentices slowed the chanting until there was silence.

As the Apprentices and Priestess went to the altar to begin the next stage of the ritual, I overheard the person standing next to me say, "OMG! She's fat! OH MY GOD!"

My jaw dropped! First, I could not believe I just heard what I heard. Secondly, I thought she was gorgeous. She wore a flowing blue gown with a black corset. I did not see her as being fat at all. She was not skinny, but she was in no way appalling or deserving of that comment. It became obvious to me that the people in that ritual were expecting her to be thin because she was experienced and knowledgeable. In their minds, people who have creditability are those with a thin figure.

Sadly, we seem to live in a nation where our size dictates how people react to us and our abilities. Sure, our nation has a serious obesity epidemic, but I think our perceptions of this issue are jaded. We are a nation that sends mixed message to one another. At the grocery store, we are bombarded with advertisements for packaged processed junk that fits nicely into a tight budget. Then, at the checkout counter, we see ads and magazine articles telling us how to lose 20 pounds in ten days!

I honestly believe that the way we view one another and ourselves seriously affects our ability to be spiritual people and proficient in Magickal arts. If we are hung up on looks rather than talent, knowledge, and experience, we are missing the big picture. When we think someone's abilities are contingent on their pant size we have some serious issues to overcome.

Over the years, I have become mildly obsessed with nutrition and exercise. If you want to know the nutritional value of a food, I probably know it. I go to the gym at least three times a week and when I am not at the gym I get plenty of exercise walking the dog, working in my yard, hiking, and running after my two kids. My husband will be the first to say that I have trouble sitting still. He is surprised I do it long enough to nurse our son.

As I sit here at this moment writing this article, I am eating a spinach salad with carrots, tomatoes, red onion, and light dressing. This morning, I went to the gym and did my routine with my trainer for an hour and a half. Later I plan on digging up a large plant bed in my yard. According to my lifestyle and doctor, I am very healthy. But, according to the media and medical community, I am not!

According to the medical community and media, I should be falling down gasping for air and suffering a heart attack right now! Instead, I am eager to dig up deeply rooted plants in my garden after spending my morning at the gym. Something somewhere is amiss.