One Nation, Many Bibles: Obama vs. Dobson 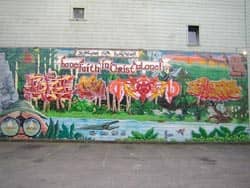 The current political landscape is rough and, it seems, getting rougher all the time. And one of those rough spots involves the way in which religion is understood and engaged -- what we assume about proper practice, and what we argue in terms of proper reading of sacred texts. In light of this arrangement, I'd like to offer a suggestion, or better yet a recommendation: Regardless of what recent debate and disagreement suggests, we would be wise to let go of the assumption there is a correct and "true" reading of the Bible. This is not the case, and it has never been the case. It will never be the case.

The Bible is always read in light of the reader's historical and cultural context -- always has been and always will be. That is to say, we bring our concerns and ourselves to the Bible. This is not a problem unless it goes unacknowledged, hidden behind a thin veil of religious self-righteousness and arrogance. And regarding this, evangelicals don't have a direct line to the world of the Bible and the intent of the scripture message; but neither do those who are more liberal in their religious outlook. Both perspectives, and all those in between, can do great harm when they involve (by commission or omission) speaking about biblical claims out of context, without proper attention to the world in which those passages were forged and the interests and preoccupations of contemporary readers.

And, why not learn from our past, the long and somewhat tense relationship between these United States and the biblical text? This nation, in significant ways, was forged within the crucible of debate over how the Bible would have people interact. Such a historical perspective might help us put in context recent struggles over who gets to interpret scripture and what that interpretation must entail. If nothing else, such sensitivity should help us move beyond simplistic assertion of the one way to be Christian. Who can really look at the diversity of Christian perspectives and postures and assert that there is one, and only one, understanding of Christianity and the Bible that frames much of what Christians think they believe?

Recent days have produced something of the perfect storm regarding the meeting of politics, religion, and race. Yet, this is not the first time these three big issues have surfaced, produced a synergy. The very life fabric of this country we call home is colored by such debate, a wrestling with the proper understanding of religion and the biblical text. From early efforts to justify slavery using biblical texts, to more recent pushes for discrimination against gays based on what some assume the "Bible says," scripture has been pulled from the book and presented as proof-positive that God doesn't like particular groups and privileges others. Yet, on the other hand, advocates of abolition, full rights for all, and so on have also turned to scripture and challenged assumptions that God dislikes certain groups and sanctions their abuse. The Bible has been used with great force to sanction a host of activities -- some of them affirming of life and others damaging in long-lasting and deeply painful ways.

Even a quick look at the Bible within the history of the United States pushes for acknowledgment that the biblical world is not our world. And many of our current issues and concerns are beyond the imagination of those captured in the biblical text. Hence, while the Bible remains a vital guide, an important way to forge ethical sensibilities and moral perspective, it does not do so in a direct manner. There are underlying principles lodged in biblical stories that can be useful as we seek to make sense of the world and to live in productive and life-affirming ways. These principles would include respect and compassion toward others as demonstrated through the Christ Event.

But there are also negative lessons awaiting us in the biblical text. And these, including some of King David's bad behavior and the lack of hospitality demonstrated by those in Sodom and Gomorrah, teach us how not to behave. Again, there is no one way to read the Bible, no one "true" interpretation of scripture. The Bible has always been open to a host of readings, perspectives, and opinions: negative and positive morality tales. A problem emerges when we conflate the two by assuming that anything mentioned in the Bible entails an encouraged way of life.

These pieces of wisdom and insight, both how to behave and how not to behave, must be carefully discussed in light of our current world and our place in it. Doing so, in light of the complexity and uncertainty of biblical interpretation, must involve a type of humility and openness to debate and dialogue that has not always been demonstrated in recent days. We should test what our leaders say about the Bible and its meaning, test their words and interpretations against a clear standard: the affirmation of justice and peace in ways that respect difference and diversity as important and not to be destroyed for the sake of a flat and restrictive sameness.