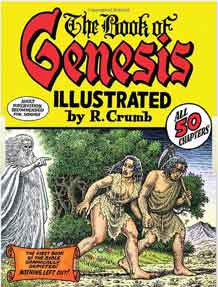 Among the other odd and entertaining sights that spelled last Halloween night in San Francisco -- Michael Jackson on the MUNI bus, Barbara Streisand teetering on four-inch heels at Starbucks -- was this one: comix artist Robert Crumb onstage at the San Francisco Jewish Community Center, headlining the Jewish Book Fest at its sold-out opening event.

Basically it was the usual Jewish Bay Area crowd, coming out in droves for Crumb, who had apparently become an honorary member of the tribe by illustrating that tribal book of ours, Genesis; no doubt a few of them were just now being introduced to Crumb, through his freshly-minted biblical pedigree. But there were some hipsters standing in line to buy a copy ($60 for the autographed version) who looked as if they had never set foot in a JCC before, and who were only reading the Bible now that Crumb had, so to speak, recommended it. Among that group was Crumb's elegant onstage interlocutor, Françoise Mouly, the art director of The New Yorker, who began by confessing, "You know, Bob, I never actually read the Bible before you showed me your illustrations," to which Crumb gamely answered, "No, of course not, why would you?"

For those of us who were reasonably familiar with both the Bible and underground comix, the experience was not of being introduced either to a new artist or to an ancient literary work but rather of their unexpected juxtaposition: Where Genesis and Crumb had until now occupied distinct areas of the brain or psyche (the academy versus the comic book store? The cerebrum versus the reptilian cortex? The superego versus the id?), they now coexisted on the cramped quarters of a single page. There are some peculiar pleasures in the union of these realms, in a biblicized Crumb, a Crumbulated Genesis.

The unspoken assumption in most reviews I've seen is that the latter is the more interesting phenomenon, or at least the more important one, with the greater cultural stakes. As others (including Robert Alter, whose translation undergirds most of Crumb's text) have commented, Crumb's illustrations quite literally flesh out the biblical stories, giving face and form -- and nipples, backsides, lips, teeth, and hair, lots and lots of hair -- to its characters, including the especially hirsute character of God (a kind of manlier and more ancient Mr. Natural, with an even longer beard); the names of the Genesis genealogies, Mehalel and Jared and Enoch and so on, who'd barely registered in consciousness before (even the rabbis are uncharacteristically silent in the face of these endless begats), come to life again, recognizably products of Crumb's art but nevertheless individual people, with unique and distinct faces.

What seems to have surprised many of the reviewers, including this one, is not only how "straight" Crumb played the Bible, but also how far from jolting even the most striking of these illustrations are, as if he were not imposing an alien and coarse modern sensibility on an exalted ancient text but rather uncovering a certain Crumbitude that had always been inhabiting it. There was, it seemed to me, an affinity between whatever it was Crumb stood for (sexual lewdness as well as emotional honesty, a fascination with the unbeautiful body, the interconnections between desire and vulnerability or beauty and power) and whatever Genesis had on offer.

What does it mean that the Genesis that emerged from Crumb's eccentric pen could nevertheless seem so familiar, that there should be no mismatch between Crumb's idiosyncratic style and a book of such broad and, to many readers, sublime reach as the Bible? Could it be just a kind of fortuitous connection between the mythology of Genesis and the background to Crumb's coming-of-age as a comic artist among the stoned biblical types that rolled half-naked around the Eden of Golden Gate Park? Was the missing link in the evolutionary scheme that begins with Creation and ends with Crumb on the JCC stage not a half-upright ape but just a shaggy hippie?

Of course these are surface similarities, and the criticism of Crumb's version has been that it reduces the Bible to surfaces, to "mere" appearance. Buber once said, though, that what was needed in the case of the Bible was not more and deeper digging but rather a return to the surface, through the layers of "meaning" and "significance," the accretions of interpretation and tradition that had buried the biblical story until we couldn't see the nose on its face. The fleshiness of Crumb's characters is not foreign to the biblical worldview: The "hairy mantle" that covers the newborn Esau is a key to his character and, a few chapters later, a pivotal plot point. Crumb's visual translation brings us back to that forgotten surface, lost not only to the pieties of religious readings but inevitably also to its translation out of Hebrew.