Faith & the Gospel of Mark

Throughout this period of beginnings, Mark shows that Jesus is at center stage and that the disciples play a minimal role: they are still on a level with the crowds who also see all that he is doing and saying. We can see here the beginning of our spiritual journey of faith learning. Our vocation began by hearing about an ideal, about a person, group, or event. We wanted to learn more about a fascinating and true way of spending our life and so observed and studied how this new ideal was related to who we are. The data found in Mark's Gospel pertain to other people at another time, but they can be translated into this type of experience, the beginning of our faith journey.

The next two sections in Mark's itinerary of faith define two stages between this initial consideration of the good news and the act of faith as decision and commitment. Mark, of course, did not consciously plan how the disciples of Jesus would be led to believe in Jesus, yet Mark knows that Peter's confession of faith at Caesarea Philippi was the culmination of a time period and a learning process. The traditional materials in this part of the Gospel (chaps. 3-8) are parables, the multiplication of bread, the Baptist's death, further controversies with the Pharisees over ritual purity, and new instructions for the disciples. But Mark sees them as more than just a collection of traditions or a journal of a time period. They are a careful, studied preparation for the time when Peter will be able to say "You are the Christ" in response to Jesus' question "Who do you say I am?" Mark divides this period into two parts, since it contains two stages in faith learning.

The first part of this new phase in faith -- and the second section of the total Gospel -- shows how the disciples became Jesus "family." In the beginning of this section, "his relatives set out to take charge of him, convinced he was out of his mind" (3:20-21). Later, Jesus clarifies the relationship of these relatives to his disciples, his true family:  "'Who are my mother and my brother?'... Looking round at those sitting in a circle about him, he said, 'Here are my mother and my brothers. Anyone who does the will of God, that person is my brother and sister and mother'" (3:31-35). At the end of this section, structurally related to this beginning, we learn that his acquaintances in Nazareth "would not accept him," and Jesus says: "A prophet is only despised in his own country, among his own relations and in his own house" (6:1-6).

What had happened? How had the invited (including his mother) become disciples rather than simply relatives or acquaintances? There is first a revelation about Jesus himself. His words, spoken in parables, about the kingdom of God "are words of eternal life." Not only do these words tell of the mystery of God, they also plant it in people's hearts, to grow and be fruitful -- on condition that one accepts Jesus as word of God, the vehicle God is using to reveal the divine self. But this revelation of Jesus, which the disciples will only slowly comprehend and accept, involves an initiation. In order to become part of Jesus' family they must realize the meaning of the signs he is giving; they must see the spiritual power of a "stronger household" (cf. 3:27) that he offers. They must become "fertile ground" where the word can produce thirty, sixty, even a hundredfold, because they have listened to Jesus' words, rather than just hearing them, and because they have been personally invited into the "secret" of the kingdom (4:1-12). The disciples remain passive before Jesus' mystery in this stage, as the calming of the storm shows (4:35-41); yet they are already in the "boat" with him and are thus filled with awe when he calms the storm. They realize they have very little faith and ask, "Who can this be? Even the wind and the sea obey him." They carry within them a question that thirsts for an answer.

The second part of this initiation (6:6b-8:30) describes how Jesus' disciples began participating in his mission before they realized what they were doing, especially his mission of giving a bread that truly nourishes. Faced with a hungry crowd, they are invited to "Give them something to eat yourselves" (6:37). Yet they cannot understand how this is possible: "Are we to go and spend two hundred denarii on bread for them to eat?" In fact they understand very little of anything during this period, although they set out to preach repentance, to cast out devils, and to anoint sick people and cure them (6:12-13).

The main misunderstanding, however, and the key to Jesus' mission, is bread. Jesus gives them a miraculous bread that feeds thousands. Mark emphasizes their misunderstanding of the meaning of bread in an unexpected way. He tells us that the disciples "were utterly and completely dumbfounded" at seeing Jesus walk on water "because they had not seen what the miracle of the loaves meant; their minds were closed" (6:52). Later (8:17-21), commenting on the "danger of the yeast of the Pharisees" who asked for a sign, Jesus reproached his disciples' lack of perception and understanding by recalling the breaking of five loaves among the five thousand: "'Have you eyes that do not see, ears that do not hear? Do you not remember: When I broke the five loaves among the five thousand, how many baskets full of scraps did you collect?'... Then he said to them, 'Are you still without perception?'" 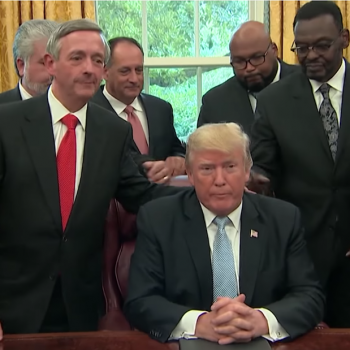 Parenting in Pandemic Time
Adam Lee
Get Patheos Newsletters
Get the latest from Patheos by signing up for our newsletters. Try our 3 most popular, or select from our huge collection of unique and thought-provoking newsletters.
From time to time you will also receive Special Offers from our partners that help us make this content free for you. You can opt out of these offers at any time.
see our full list of newsletters
Editor's picks See all columnists