This article taken from The Jewish Virtual Library, which uses Joseph Telushkin's book, Jewish Literacy: The Most Important Things to Know About the Jewish Religion, Its People and Its History, outlines the development of the Talmud from a strictly oral tradition to a written resource (Mishnah) with commentary (Gemara).

Of historical note -- Bar-Kokhba is the common name for Simon Bar-Kokhba who lived during the Roman Empire and led the Bar-Kokhba Revolt in 132-135 C.E. This was the second major Jewish revolt against Roman persecution.  In the first, the Great Revolt in 66-73 C.E., the Romans had destroyed Jerusalem and the Holy Temple, forever altering how Jews worshiped. The Bar-Kokhba rebellion was brutally crushed by overwhelming Roman forces. According to one Roman historian, 580,000 Jews were killed, while the Talmud claims the fatalities were in the millions. One tractate of the Talmud states that the Romans "went on killing until their horses were submerged in blood to their nostrils" (Ta'anit 4:5). This is another loss that is commemorated on Tisha B'Av. 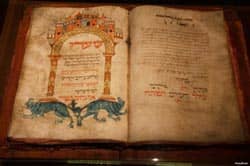 The Jewish community of Palestine suffered horrendous losses during the Great Revolt and the Bar-Kokhba rebellion. Well over a million Jews were killed in the two ill-fated uprisings, and the leading yeshivot, along with thousands of their rabbinical scholars and students, were devastated.

This decline in the number of knowledgeable Jews seems to have been a decisive factor in Rabbi Judah haNasi's decision around the year 200 C.E. to record in writing the Oral Law. For centuries, Judaism's leading rabbis had resisted writing down the Oral Law. Teaching the law orally, the rabbis knew, compelled students to maintain close relationships with teachers, and they considered teachers, not books, to be the best conveyors of the Jewish tradition. But with the deaths of so many teachers in the failed revolts, Rabbi Judah apparently feared that the Oral Law would be forgotten unless it were written down.

In the Mishnah, the name for the sixty-three tractates in which Rabbi Judah set down the Oral Law, Jewish law is systematically codified, unlike in the Torah. For example, if a person wanted to find every law in the Torah about the Sabbath, he would have to locate scattered references in Exodus, Leviticus, and Numbers. Indeed, in order to know everything the Torah said on a given subject, one either had to read through all of it or know its contents by heart.

Rabbi Judah avoided this problem by arranging the Mishnah topically. All laws pertaining to the Sabbath were put into one tractate called Shabbat (Hebrew for "Sabbath"). The laws contained in Shabbat's twenty-four chapters are far more extensive than those contained in the Torah, for the Mishnah summarizes the Oral Law's extensive Sabbath legislation. The tractate Shabbat is part of a larger "order" called Mo'ed (Hebrew for "holiday"), which is one of six orders that comprise the Mishnah. Some of the other tractates in Mo'ed specify the Oral Laws of Passover (Pesachim); Purim (Megillah); Rosh ha­Shana; Yom Kippur (Yoma); and Sukkot.

The first of the six orders is called Zera'im (Seeds), and deals with the agricultural rules of ancient Palestine, particularly with the details of the produce that were to be presented as offerings at the Temple in Jerusalem. The most famous tractate in Zera'im, however, Brakhot (Blessings) has little to do with agriculture. It records laws concerning different blessings and when they are to be recited.

Another order, Nashim (Women), deals with issues between the sexes, including both laws of marriage, Kiddushin, and of divorce, Gittin.