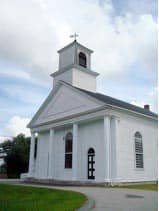 I am an American Baptist. Now, for the vast majority of folks, that probably sounds like I am a Baptist in America, which is true, but not the whole story. The American Baptists (formerly known as the Northern Baptists) are considered a mainline denomination fairly distinct from some of the other Baptist groups in the U.S. There are, for instance, some sizable differences between American Baptists and, say, Southern Baptists (who are probably the largest Baptist denominational group here in the States). I can drink and dance, though some may disagree with the latter claim. I'm not a "bible-thumper" and I am not advocating the teaching of Creationism in schools. Even though I am a Baptist, I and many other Baptists don't actually fit the stereotypes that have been associated with that term.

What is it about the American Baptists that makes me continue to call myself one? There are a few reasons. First, there is the diversity in the denomination. I am currently attending the denomination's biennial meetings in Pasadena, CA and I am struck, as I have been at previous meetings like this, at the wide variety of theological views, ministerial passions, and ethnic backgrounds represented here. Being a white male and having grown up in the suburbs of Rhode Island, diversity was not something I enjoyed on a regular basis earlier in my life. The very fact that such a wide group of people can come together is encouraging to me, especially when it seems so easy for varying groups, whether theological, political, or ethnic, to self-isolate.

Second, and the reason I think such diversity is possible, is the freedom in the American Baptist denomination. Baptists historically have placed great emphasis on the life of the local church over the broader denomination, which has usually meant that the local church is the entity that has the final say on matters. Certain Baptist groups have gone away from this mentality, but the American Baptists hold to it as much as they can.

Finally, being an American Baptist gives me a connection to a deeper history than I might find if I jumped ship and became "non-denominational." Martin Luther King Jr., Walter Rauschenbusch, and Roger Williams (the founder of Rhode Island and advocate of religious liberty) were all American Baptists. The fact that I have some sort of connection to those people is encouraging to me.

I will be the first to admit that the American Baptist denomination is not without its flaws. Like many mainline denominations, many of the churches are graying and some are even dying. Young leaders and participants are still more of the exception than the rule in every region I have seen. Our denomination, like others, has been torn apart by issues like homosexuality. There is still a strong urge to keep things the way they were, stifling pastors and lay participants who might want to really try something new.

Even with all of that, I still have hope for our future. Right now, I am blessed to be part of a group of young (and by "young" I mean under the age of 40) leaders who want to work for the betterment of our denomination, even though some of us are the same age as many congregants' children and grandchildren. While we are still figuring out what that might look like, there is passion and intelligence in this group that gives me hope for what might be accomplished.

Also, the same freedom of the local church that is such a characteristic of the American Baptist churches has the potential for letting congregations do new and amazing things as churches, if they open themselves to new ways of doing things. I am not saying that they churches need to throw out everything that might seem "old." However, since the American Baptist churches have no set liturgy, for instance, there are countless ways in which a church can worship to encounter a new generation of believers and non-believers.