Are Allah and God the Same? 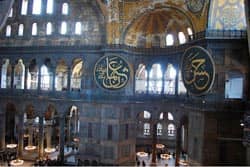 Muslims and Christians: How to Get Along?

Both Christians and Muslims believe in one personal and transcendent God who has sent his prophets into the world. They both believe in sacred writings that record the prophetic revelations. They both believe that Jesus was a prophet who was sinless and born of a virgin. And they both worship with these beliefs firmly in place. We are speaking of Muslims and Christians, whose members comprise the two largest monotheistic religions in the world.

In the wake of the terrorist attacks of September 11, 2001, Americans have become fascinated with the beliefs and practices of Islam, which is the fastest growing religion in the world, with approximately 1.3 billion adherents. Increasingly, Muslims are immigrating to the West. In various American cities, it is not uncommon to find mosques -- many of them newly built -- and to see women in the traditional Muslim dress mingling with American women dressed quite differently.

In light of this, many Westerners wonder what Muslims believe and why. They also question the relationship between Islam and Christianity. Do Muslims and Christians worship the same God, but merely in different ways? Should Christians seek to present their beliefs to Muslims in the hope that the Muslim might forsake Islam and embrace Christianity? Or is this simply a waste of time at best or rude at worst?

Many instruct us to be "tolerant" and to refrain from "proselytizing" anyone. In the name of tolerance, some people say that Christians and Muslims should coexist without trying to convert (or otherwise challenge) each other because "Christians and Muslims worship the same God." This, many believe, should be good enough for Muslims and Christians. Many also believe this arrangement is good enough for the God they both worship as well. If both religions worship the same God, why should they worry about each other's spiritual state?

If indeed Muslims and Christians worship the same God, there would be little need for disagreement, dialogue, and debate between them. If I am satisfied to shop at one grocery store and you are satisfied to shop at another store, why should I try to convince you to shop at my store or vice versa? Do not both stores provide the food we need, even if each sells different brands?

The analogy is tidy, but does it really fit? Deeper questions need to be raised if we are to settle the question of whether Christians and Muslims worship the same God. First, what are the essential teachings of Christianity and Islam? Second, what does each religion teach about worshipping its God? Third, what does each religion teach about the other religion? That is, do the core teachings of Islam and Christianity assure their adherents that members of the other religion are fine as they are because both religions "worship the same God"?

In When Religion Becomes Evil (Harper San Francisco, 2002), Charles Kimball argues that Christians and Muslims do indeed worship the same God. Kimball rightly observes that truth claims are foundational for religion. But he claims that believers err when they hold their religious beliefs in a "rigid" or "absolute" manner. So, he argues, when some Christians criticize the Islamic view of God (Allah) as deficient, they reveal their ignorance and bigotry. Kimball asserts that "there is simply no ambiguity here. Jews, Christians, and Muslims are talking about the same deity" (p. 50). This is because the Qur'an affirms that Allah inspired the Hebrew prophets and Jesus. Moreover, the Arabic word "Allah" means "God." Are Professor Kimball and so many others who echo similar themes correct? In search of a reasonable answer, we will briefly consider the three questions from the last paragraph.

Christianity and Islam: The Claims, the Logic, and the Differences

First, what are the teachings that each religion takes to be absolutely true? Although Islam and Christianity are both monotheistic, their views of God differ considerably. Islam denies that God is a Trinity -- that one God eternally exists as three co-eternal and equal persons: the Father, the Son, and the Holy Spirit (Matthew 28:19). [1] Islam also rejects that God became a man in Jesus Christ (John 1:1-18). [2] These doctrines are cornerstones of Christianity. But God cannot be both a Trinity (Christian) and not a Trinity (Islam). This is matter of simple logic; it has nothing to do with religious intolerance or being "rigid."

For Christianity, humans are corrupted by an inherited sinful nature that cannot be overcome by any human means (Ephesians 2:1-10). But Islam denies that human have a deeply sinful human nature, claiming that we sin because we are merely weak and ignorant. [3] Christianity teaches that salvation is secured only through faith in the achievements of Jesus Christ -- his life, death, and resurrection (John 3:16-18). Islam, however, implores its followers to obey the laws of the Qur'an in the hopes that they will be found worthy of paradise. [4] Since these two views contradict each other, both views cannot be true.