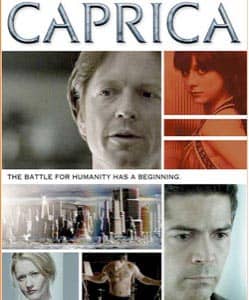 Caprica, the prequel to the acclaimed SyFy TV series Battlestar Galactica (2004-2009), debuted with a two-hour pilot episode on January 22nd.  Much anticipated by connoisseurs of future societies -- or science fiction nuts, as some call them -- Caprica is set 58 years before the events recounted in the Battlestar Galactica series.  This heady series tackles the fascinating themes of religion and the post-human, religious terrorism, family ties, and impending social catastrophe.

Fear not, if these themes attract your interest, you can jump right into Caprica.  The producers have ensured that Caprica will appeal to whole new audiences, ones that never watched Battlestar Galactica (for example, viewers like me).

But if you were a fan of the recent Battlestar Galactica, Caprica promises to answer the questions that lurked in the background of the first series.  How were the android Cylons invented?  What were human beings and their society like before the Cylons invaded and almost destroyed the planet of Caprica?  How did the Cylons -- very sophisticated machines, but machines, after all -- become fervent devotees of the one true God?  That last question is extraordinary.  Would the sophisticated androids of the future have religion?  What would they believe?  How would "robo religiosus" compare to homo religiosus?

Caprica opens in a not-too-distant future that is beautiful, technologically sophisticated, and vaguely retro.  Touches of 1950s aesthetics hint around that an ossified society is stifling its culture and its citizens.  The well-to-do enjoy their advantages, but class and ethnic tensions lurk just beneath the surface.  Young people abandon themselves in a highly realistic virtual world called the V-Club, a noisy techno-pop dance club where avatars indulge in dancing, sex, fight clubs, executions, and even the bloody sacrifice of virgins.

Eric Stoltz plays Daniel Graystone, a quietly forceful man who leads a company that designs and manufactures robots.  His wife Amanda (Paula Malcomson), a doctor, is intelligent, playful, and competitive.  Their teenaged daughter Zoe (Alessandra Torresani) is all teenager.  Her style is part Goth, part Nerd, and all Very Serious.  The Graystone's lakeside house is clean, modern, and functional on the inside, indicating that Daniel and Amanda are busy people who lead dynamic, well-organized lives.  Housekeeping, security, and butler duties are performed by a sophisticated robot named Serge.

This is not a godless culture of the future -- quite the opposite.  Polytheism is the dominant religious structure of this society, and we learn early on that a fringe element professing monotheism is asserting its ideas, sometimes violently.  In the pilot episode's opening act, a teenaged boy-turned-suicide bomber detonates an enormous bomb strapped to his chest on a busy commuter train, after shouting, "The One God shall drive out the many!"  It turns out the boy is a member of a monotheistic group called the Soldiers of The One (STO).  They are swiftly condemned as terrorists.

Unfortunately for Daniel and Amanda Graystone, their daughter Zoe was on that train.  The trauma of losing her devastates their lives.  Their trauma only increases as they learn the details of the bombing, including evidence implicating Zoe in the bombing.

But in the midst of his despair, Daniel learns that before her death, Zoe had created an avatar in the V-Club that is her exact duplicate in appearance, and nearly her duplicate in sentience.

Zoe was a computer genius, and had developed an advanced biofeedback link between herself and her avatar.  Amazingly, this biofeedback program syncs the virtual avatar of Zoe to the real world Zoe even when she isn't online.  The two are directly linked, with no mainframe intermediary required.

When Daniel finds Zoe's avatar, he downloads it from the virtual world of the V-Club to his own system.  He approaches Joseph Adama (Esai Morales), a man with underworld contacts who also lost his daughter in the bombing.  They arrange the theft of a device called a meta-cognitive processor (MCP).  Once Daniel has the MCP, he downloads Zoe's avatar and inserts it into his cyborg.  He brings Zoe back.  A kind of resurrection is accomplished.

Science fiction has long been fascinated with the proposition that a person's consciousness could be formatted and uploaded to a safe mainframe, and then downloaded into biological or cybernetic organisms, theoretically promising immortality.  Caprica promises a sustained look at the hypothetical first time this happens, how it is accomplished, and what it could mean for biological humanity.  Transferring Zoe's avatar from the virtual world to the real one is an act that has huge implications for the very foundations upon which humanity builds its ideas of the afterlife.