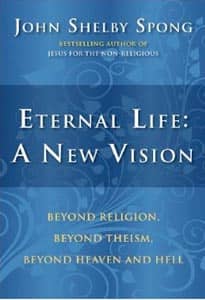 John Shelby Spong's most recent book is a personally moving account of why religious people today must deal directly and honestly with death, and his answer to death's sting is a refreshingly naturalistic account at home in a scientific age. More than a treatise on what comes after death, his work shows that it is possible to live courageously and even joyfully in the face of this fact of life. Unfortunately, his theological critiques remain half finished and cause him to stumble toward his conclusion rather than reach it triumphantly.

Spong's newfound confidence in life after death came from investigating the facts of biological life that let him recover the true meaning of John's Gospel. Spong presents life and death as contrasting terms in need of each other for understanding. Regarding life, its emergence is a chance occurrence resulting from contingent cosmic and biological events. Life is also interdependent. Each creature owes its form and survival to an ecological environment. Death, then, is also part of the natural cycle of life. Conscious beings are uniquely burdened with, and terrified by, knowledge of that fact. In face of this knowledge, Spong cannot accept assurance that everlasting life in God's presence will follow. Death must be honestly dealt with before there can be joy.

The critiques Spong levels at traditional Christian doctrines are well known, and there is no need to recount his reasoning in detail. It suffices to say that finite created words cannot capture ultimate truth, and what humans want to believe religiously outpaces their ability to do so. This formula applies to traditional beliefs about Heaven, which are often clichés meant to ignore or pacify, rather than confront, real grief over death. Against desires for supernatural assurance after death, Spong looks toward life to find hope.

The interdependence of all life leads Spong to postulate consciousness as a unified whole accessible on a variety of levels. At one point, self-consciousness appeared along with a sense of separation from the rest of the universe. Spong is pointing toward a new awareness that we have always been part of a greater reality rather than disconnected from it (p. 146).

This new consciousness appeared in Jesus as he is presented in John's Gospel. Jesus transcended every earthly limit in such a way that his followers knew God had been found in this life. Jesus exemplifies emerging levels of consciousness culminating in universal consciousness. So rather than a transcendent and intrusive being, God can be understood as "the process that calls personhood into being" (p. 155). All finite limits, including death, can be passed beyond into "life at one with God, at one with myself, and a part of eternity" (p. 208). It is this fact in which we live and move and have our being.

There is much to recommend in Spong's vision. Serious writings about death and the afterlife are not prevalent, and his work gives pressing existential reasons to reopen the issue. The vision is also pluralistic. Anyone's self-consciousness can become one with a God beyond traditional boundaries. However, Spong is also correct, at least in my case, to believe that younger and future generations will say, "He was not nearly radical enough" (xii).

I cannot make sense of Spong's disdain for religious language. Mystics have shared amazing language, poetry, and art, knowing all the while that any medium will provide inadequate expression. Even Paul Tillich, whose work is mentioned often by Spong, knew that finite human language could not assent to descriptions of God. Nonetheless, symbolic, not literal, language is necessary to express the human meeting with divine reality, our ultimate concern.

Furthermore, depending on whether one agrees with the adaptation or byproduct evolutionary account of religion, of which Spong seems unaware, religious language would not be a tool for manipulating human behavior (pp. 97-106). It would naturally express the needs of biological beings. So words that do not correspond with a distinct entity can be considered "religious narcotics" (p. 6) or they can be understood as natural expressions of real experiences.

Symbolic language that is literally false can crucially orient a life as long as that falsity is kept as a constant reminder. Since symbols can perform important functions even when their referents are known not to exist as the symbols describe, fantastic imagery of Heavenly life might even be a more appropriate way for Spong to relate the peace and joy he has found to others. Refusing to talk about a life-changing experience, rather than a personal expansion into the entire universe, marks a rejection of the rest of the universe.