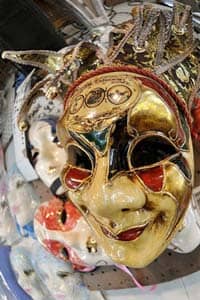 In order to be realistic
Must we be so dualistic?
Could Tuesday be more lean
So Wednesday was less mean?
Boom plus bust divided by two
I'm cool with average - how 'bout you?
Ain't there a way to soften the blow
When the economy loses its go go go?
When the going finally gets this rough
Why should life for kids be tough?
Are they to blame for blatant greed?
So why are they the ones to bleed?
Bailed-out banker gets the bonus
Poor folks have to bear the onus
No grease for wheels you can't hear squeak
Who speaks for those who cannot speak?

Fat Tuesday
Ash Wednesday
Tuesday jammin'
Feast then famine
Tuesday: bent
Wednesday: Lent
There's a fly in the ointment, a bug in the mixture
Something's terribly wrong with this picture

Fat Tuesday,
Ash Wednesday
Denial Tuesday,
Depression Wednesday
Gotta resist 'em!
Gotta change this system!
Vote and write and wave your signs
Get other folks to change their minds
So that the little engine on Tuesday says I think I can
And the little engine on Wednesday says I thought I could
Get over the mountain of despair
Finally get from here to there
To decent schools and good health care
To homes for the houseless everywhere
Counseling for struggling families
And credit for little companies

So sing a song and hoist your glass
Howl and holler and shake your ass
Here's to tighter Tuesdays
And weightier Wednesdays... Amen!

Reprinted with permission from the blog Musings at The Center For Progressive Christianity.