A God Thing: A Friday Devotional 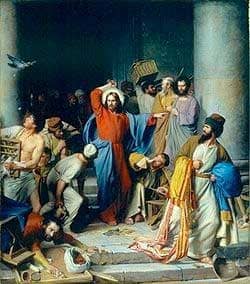 The word of the LORD that came to Micah of Moresheth during the reigns of Jotham, Ahaz and Hezekiah, kings of Judah -- the vision he saw concerning Samaria and Jerusalem.

Hear, O peoples, all of you,
listen, O earth and all who are in it,
that the Sovereign LORD may witness against you,
the Lord from his holy temple.
Look! The LORD is coming from his dwelling place;
he comes down and treads the high places of the earth.
The mountains melt beneath him
and the valleys split apart,
like wax before the fire,
like water rushing down a slope.
All this is because of Jacob's transgression,
because of the sins of the house of Israel.
What is Jacob's transgression?
Is it not Samaria?
What is Judah's high place?
Is it not Jerusalem?
"Therefore I will make Samaria a heap of rubble,
a place for planting vineyards.
I will pour her stones into the valley
and lay bare her foundations.
All her idols will be broken to pieces;
all her temple gifts will be burned with fire;
I will destroy all her images.
Since she gathered her gifts from the wages of prostitutes,
as the wages of prostitutes they will again be used."

Micah's name is a shortened form of Micaiah, which means, "who is like the Lord (Yahweh)?" Of course, this is not really a question seeking an answer but a statement demanding a response. It is an apt name for a prophet who proclaims stern reminders of God's incomparable authority and character--reminders that contain both seeds of doom and hope. Micah begins with an invocation of the whole earth (v. 2). He reminds his hearers that the Lord is not the deity of Israel alone. The Lord's domain stretches to the ends of the earth. While God may be personal, He is not parochial. We are often tempted to fit God into our personal schemes and pet projects. His purposes, however, are cosmic. For this reason, Micah depicts the temple in shocking terms. There will be times that the Lord must stand against us, because we stand against His purposes.

As the capitals of their respective nations, Samaria and Jerusalem ought to be the pride and glory of Israel and Judah. Micah agrees with half that sentiment. These cities are indeed the pride of the nations, but they are far from their glory. Instead of being the seats of civic justice, political wisdom, and spiritual blessing, Samaria and Jerusalem are the symbols of rebellion, idolatry, and unfaithfulness. Prostitution is a shocking but appropriate metaphor of the ways in which Israel had sold itself to other gods. Centuries later, Jesus would stand at the threshold of the Temple and similarly declare that the Jews had turned the God's ‘house of prayer' into a ‘den of thieves' (Mt. 21:13). The rebukes of Micah and Jesus soberly warn us that we too easily turn the things of God to our things. His glory fades behind our pride.

"The heaviest obligation lying upon the Christian Church today is to purify and elevate her concept of God until it is once more worthy of Him." -- A.W. Tozer

Who is like you, O Lord? You alone are majestic in holiness and awesome in glory. Grant us the grace to see You properly and to adore You fittingly so that we may quit those things that shame and pursue those that honor You. Amen.