The women fled from the tomb, trembling and bewildered, and they said nothing to anyone because they were too frightened (Mark 16:8). 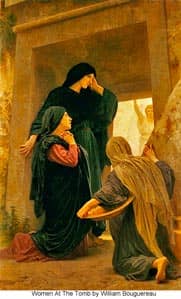 The ending of the Gospel of Mark presents multiple mysteries. Most English Bibles print several options for the concluding verses of Mark 16, usually with notes that explain the curious manuscript evidence. The oldest manuscripts of Mark end with verse 8, the last words being: "because they were too frightened" (ephobounto gar in Greek). The women who had been the first witnesses of the empty tomb and who had been told of the resurrection of Jesus by an angel kept the news to themselves out of fear.

Of course, this is an ironic ending and that may well have been Mark's point. We know from the other Gospels and from the longer endings of Mark that the women soon shared what they had experienced with the other disciples of Jesus. Their fear turned to excitement and even boldness as they delivered the good news of the resurrection. This is telling, because a women's witness was undervalued in 1st-century Jewish culture, yet they became the first evangelists of the victory of Jesus over death.

So the original ending of Mark is ironic, in part because the fearful silence of the first witnesses to the resurrection soon became bold proclamations that would change the world. It is also ironic because the first witnesses were people whose voices had been ignored by their culture. Yet they served as a paradigm for the calling of all followers of Jesus: to announce the good news of his victory to the world.

Have you ever felt afraid to talk with people about Jesus? When? Why? What helps you to share the good news with others?