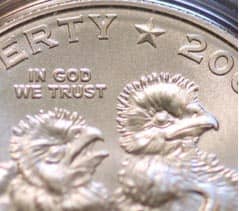 Yahoo has just bought the domain name "OMG.com" for a cool 80K. They plan, it is assumed, to use the URL for their newish entertainment portal, which serves up "celebrity gossip, news, babies, couples, hotties, and more--omg!"

It is certainly safe to say, at the very least, that the word "God" is the most vacuous word in the English language. In 21st-century America, no other word is so empty of meaning that it can span linguistic usage from the most profane text messaging exclamation to the most sacred name describing the Almighty in monotheistic traditions.

And God is constantly in the news: from evangelical sex scandals, to orthodox Jews trading in organs, to atheists trying to preserve the purity of science, and politicians competing over who is the most pious of them all. The political battles over the proper perception of God in the world around us can be strident, like the debates over Obamacare, as well as silly, like the fear that some people see Obama in divine terms.

If we all agreed on the meaning of the word "God" and reserved its application to, say, a supreme being who created the universe, there would be no confusion about its proper usage. Unfortunately, universal agreement about its reference is impossible; anyone familiar with the history of monotheism knows that consensus around a shared understanding of God is a pipe dream.

In principle, the three Abrahamic traditions pray to the same God. In reality, the differences within each tradition, let alone among the three, are vast, confounding, and indeed incommensurable. Reform Jews have more liberal views of God than Orthodox; Protestants and Catholics disagree about how to factor Jesus Christ into the God equation; and progressive Muslims understand Allah in a radically different light than fundamentalist Muslims. All this internal theological diversity for each religion makes agreement across traditions a lost cause.

According to many polls, close to 80 percent of all Americans believe in God, an extraordinarily high number compared with other industrialized nations. But what are the characteristics of this God? Do all Americans base their beliefs on a literal reading of the Bible? Is it the same God if some Americans use the term in its personal, theistic sense referring to a transcendent God in heaven and some use it to refer to a pantheistic, immanent power that infuses all of nature?

God-hating atheists like Richard Dawkins, Sam Harris, Christopher Hitchens, and others of their narrow-minded ilk have made a killing tearing down a God worshiped by childlike, blind followers not rational enough to follow lock-step behind the true idols they worship: science and secularism. God-fearing fundamentalists in the Islamic, Jewish, and Christian traditions are empowered by their vision of a wrathful deity who will distribute justice and initiate the apocalypse when people like Dawkins, Harris, Hitches, and the rest can look forward to an eternity in the burning pits of hell.

Certainly political leaders in this country work with drastically different conceptions of God. The God of Nature and Nature's God identified by the early founding fathers in the Declaration of Independence are worlds apart from the God George W. Bush appealed to when responding to the terrorist attacks on 9/11 and justifying the subsequent wars in Iraq and Afghanistan; and the ambivalences and valences of Abraham Lincoln's invocation of God during the torturous American Civil War is miles away from current President Barack Obama's easy evangelical sensibilities about faith in his God.