The Simpsons and Christianity: A New Book Review 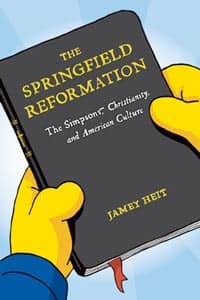 Despite a decline in the overall quality of the past several seasons, The Simpsons still manages to turn out a few funny episodes each season.  Over the past decade or so, there have been a variety of texts that take a scholarly approach to the long-running series from philosophical or theological perspectives.  The latest, Jamey Heit's The Springfield Reformation:  The Simpsons, Christianity, and American Culture, offers insights into some of the series' episodes that give a rather prophetic look at contemporary American religion.

Heit examines all 400 episodes and The Simpsons Movie (2007), but obviously centers on the episodes with more religiously themed plots like "Lisa the Skeptic," "Homer the Heretic," or "The Joy of Sect."  His intent is to "explore more deeply the extent to which Christianity influences the lives of Springfield's residents," and in so doing reveal "how Christianity has lost, or actively given away, its integrity as a socially relevant institution in contemporary American culture" (p. 2).

As such, Heit reminds us just how effectively The Simpsons has worked as scathing satire, offering different perspectives on its religious/theological implications than, say, Mark Pinsky's The Gospel According to The Simpsons, with whom he frequently disagrees.  Heit claims that contemporary American Christianity is at a critical crossroads of identity and that The Simpsons illustrates this crossroads and provides a possible way forward.

Heit's first two chapters provide something of a general approach to the series.  First, he offers a discussion of postmodernism and the series and, second, a spiritual overview of Springfield.  Heit reminds us that Springfield has Christian roots, even if the majority of its citizens have remained nominally Christian but still spiritual.  After these introductions, Heit continues with more specific chapters that focus on particular themes like God, biblical authority, the role of ministers, evangelical Christianity, spiritual wanderers, economics and religion, and science and faith.

Heit reveals in all of these discussions problems in the ways in which many American Christians approach their faith ­- reveling in a biblical illiteracy, linking economics and faith too closely, or keeping faith and science at war with each other.  In Springfield and real America, Heit writes, "The Bible ought to provide a measure of spiritual guidance and comfort, as well as serve as an authoritative moral guide, but too often it becomes a source to be massaged in order to justify personally appointed positions of authority" (p. 63).

Rather than simply passing judgment on Reverend Lovejoy, Heit portrays him as a burned-out minister who suffers from a lackadaisical congregation.  Heit adds, "In broad terms, and supported by multiple specific examples, Reverend Lovejoy embodies the way in which the church does not and seemingly cannot provide competent and legitimate leadership in contemporary American culture" (p. 71).

Heit makes sure that his readers understand that this is just as much a failing on the part of Lovejoy's congregation as it is Lovejoy himself, or the institutional forms of Christianity of which he is a part.  This discussion mirrors much of progressive theology's fears for the future of seminaries, denominations, and local congregations, but parts company with them by emphasizing the attitudes of congregants that help keep the current denominations alive.  Many congregants don't even put forth the "effort" that Homer does in cultivating their own spirituality (misguided though his occasionally may be) and are simply content to passively sit in the pew and be told what to believe or do or at least be comforted and uplifted for the week ahead.

While Heit's critique of Ned Flanders is a bit typical, his spiritual/theological engagement with Homer is quite interesting.  Heit seems to vacillate between the contrasting approaches:  "For Homer, spirituality always drifts away from the established church to a hackneyed notion of spirituality that endorses his lifestyle" (p. 106).  On the other hand, Heit agrees with the likes of Lisle Dalton et al that, "Homer personifies precisely the tendencies that define postmodern American spirituality" (p. 108).  I wonder if, taking postmodern spirituality/theology seriously, a drift away from the established church is always hackneyed.  I doubt Heit would argue this, given the seriousness with which he engages Homer's spiritual journey.