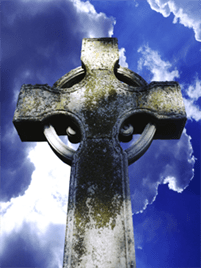 "God is a 'he'!" my five-year-old insists. Language matters. Language constructs as well as describes. For my five-year-old, God is male, and that is fine with me, as long as I can offer some nuance to that picture. The way God is described determines how my five-year-old will relate to that God. At my church, we baptize with the traditional language-in the name of the Father, the Son, and the Holy Spirit. But, our pastor also adds the phrase "One God and Mother of us all." This matters to me.

Masculine language for God was criticized as part of the Christian feminist movement as a way of challenging a male-only view of who God is. Language puts us in touch with reality. But this means that the language we use and choose (or are given) to describe something is inherently moral. It is moral because it puts us in touch with reality in a particular way that defines how we relate to it.

"That language does not speak for us!" was the feminist critique. Exclusively male language for God has made it difficult for some women (and men) to relate to God. The problem, as the critique goes, is that the model of God as Father has so dominated the Christian imagination that we actually think that "God is a ‘he'!" And if women have difficulty dealing with particular men in their lives, the image of God as Father doesn't allow for the kind of relationship we are supposed to have with God. Further, as Mary Daly says so succinctly in her book Beyond God the Father, "If God is male, then the male is God." Masculine language for God undergirds a culture of patriarchy.

But these feminist critiques of language about God were made beginning in the 1970s! Why is my five-year-old still insisting that God is male? Sallie McFague, in her book Models of God: Theology for an Ecological, Nuclear Age, suggests that new models for God will change the way we understand and relate to God. God as Mother, Lover, or Friend (her suggestions), or Jesus as Wisdom or Sophia (Elizabeth Johnson's suggestions) shift our understanding of who God is and who we are in relation to God.

Some churches and denominations have adjusted their liturgies and their choice of hymnals to attempt to correct the language we use to speak about God, or at least enhance it with different images and metaphors. But tradition is a difficult thing to overcome, especially a tradition that uses a particular ancient text as normative. The Hebrew Bible and the New Testament are the primary sources for reflection on who God is and how we should relate to God for Christians. Does this text still speak for us?

There have been a variety of feminist responses to this question, including the outright "No!" of post-Christian feminists, as well as efforts to retrieve the more liberating aspects of the Christian tradition, including the interpretation of Jesus as a proto-feminist because of his inclusive ministry. Ultimately, language about God has to make sense of our experience of God. But because language is so powerful in constructing reality, we have to find ways to measure whether we are speaking the truth, or simply repeating what we have been told, or foisting our own selfish perceptions on others.

Paying attention to the language we use, and how it fits with our actual experience of ourselves, others, and God, is one way to consciously seek the truth as we speak. Do our words and descriptions reflect what is really going on around us? Do they shed light on a given person, relationship, or experience? And practically speaking, do our descriptions of God, ourselves, others, and the world around us result in better or worse relationships? This may seem a rather circular process, but that is how language works.

Attempts to find generic or impersonal language for God, such as Ground-of-Being or "S/he" have not really taken hold, and that may be because what we experience is a personal God, who cares about us as individuals. And it is part of our tradition to see God as personally involved in our lives. We need concrete, personal metaphors for God. But we also need a balance of metaphors.

So try something new. Is God the King who commands, or the Mother who nurtures? Both images can be found in the biblical text, which can still speak for us. All language in some sense "misses the mark," but we can move closer to or further from the truth as we aim to speak for ourselves. I think if my five-year-old hears often enough that God is Mother of us all, he may begin to experience God in that way. And he may conclude that God is also a ‘she'!