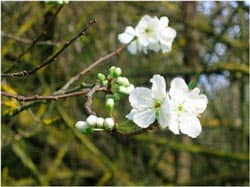 My first children's sermon was during the Lenten season in my inaugural year of congregational ministry. Though anxious about what I might say to the children -- and what they might say back in front of the entire congregation -- I was clear that in order to be full participants in worship during Lent, the young people needed to be exposed to the meaning of the colors, rituals, and symbols of the season. I sensed that many of the children were not very liturgically literate and would enjoy our explorations. What surprised me was the number of adults who were grateful to learn about Lent along with us.

We set aside these six and a half weeks to recognize that life is simply not all about us, that we are part of a great and vast universe, one reflection of an infinite and abundant God.

Traditionally thought of in terms of a time of penitence during the forty days (not including Sundays) before Easter, Lent is an invitation to humility. We set aside these six and a half weeks to recognize that life is simply not all about us, that we are part of a great and vast universe, one reflection of an infinite and abundant God. We are small and that smallness invites humility.

Those who know me well would be surprised to hear me talk about people as being small. Far too often we imagine that we are powerless and insignificant before a mighty and omnipotent God. That's why I love Marianne Williamson's reflection in A Return to Love: "Your playing small doesn't serve the world... We are all meant to shine, as children do. We are born to make manifest the glory of God that is within us." To this I say, "Yes!"

However, just as we are tempted to play small, we are also seduced by thoughts that everything is about us -- our relationships, our jobs, our problems. People are starving, dying, and grieving in Haiti, but I'm worried about money, I'm tending to a new relationship, and I'm busy with all my work. I don't have time or energy to think about the larger world right now.

And then comes Lent. A period of forty days, modeled after the forty days of Jesus' temptations in the wilderness, in which we are encouraged to see a world that expands way beyond our normal realm, a world that reminds us that our story is not the only story.

Lent begins with Ash Wednesday, a name derived from the ritual of placing ashes on the forehead as a sign of penitence. "Remember that you are dust and to dust you shall return," quotes the minister from Genesis as she outlines a cross in ashes upon the brows of congregants. The ashes are intended to remind us of our mortality, to lead us to repentance.

Rather than offering apology, to repent actually means to turn. Repentance is a turning from that which orients us to self to that which orients us to the world. It is a turning outward that moves us from our own story to the story of our neighbors, our co-workers, the young man checking us out at the grocery store. The gift of repentance -- rather than the shame with which it is often associated -- is that we recognize that we are a part of a much larger story, a much greater world, and a far more loving God than we could have imagined. Instead of being mired in our own obsessions, we turn outward to that story, to that world, to that God humbling offering ourselves to those in need.

With the help of a large piece of foam board on which I placed a series of illustrated symbols each week, I taught the children of my congregation all about Lent. Each of the six Sundays of the season while greeting folks at the door following worship, countless adults approached me and thanked me for teaching the children about Lent. It turns out that many of these adults learned alongside the children as they heard for the first time the stories and traditions of their faith.

Each week during this season of Lent, I will share a new liturgical symbol pointing to the stories and meanings of the season, and I will offer a different spiritual practice to deepen our spiritual lives and orient ourselves toward God's world. I invite you to join me on this journey toward humility.