Jesus said, "I AM. And you will see the Son of Man seated in the place of power at God's right hand and coming on the clouds of heaven." (Mark 14:62) 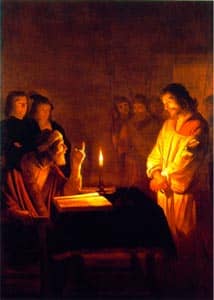 After Jesus was arrested, he was taken to the home of the high priest in Jerusalem. There, many accused him, but Jesus remained silent. Finally, the high priest asked him directly: "Are you the Messiah, the Son of the Blessed One?" (14:61). Jesus finally spoke, saying, "I AM. And you will see the Son of Man seated in the place of power at God's right hand and coming on the clouds of heaven" (14:62).

Notice that the New Living Translation capitalizes "I AM." This indicates that Jesus was claiming the divine name for God, since this is one version of the name he revealed to Moses (Ex. 3:14). Unfortunately, the original Greek of this sentence reads simply "I am" (ego eimi), which could be nothing more Jesus' straightforward answer to the high priest's question: Are you the Messiah? With his ego eimi, Jesus may have been saying: I am the Messiah.

But if Jesus was not using God's own name in reference to himself, why was he accused of blasphemy (14:63-64)? What did he say that deserved punishment, even death, in the eyes of the Jewish officials?

First, Jesus identified himself as the Son of Man, an almost divine figure who, according to Daniel 7:13-14, would come on the clouds to rule over all the earth. This, if not true, is such an audacious statement that it borders on blasphemy.

Second, Jesus elaborated upon his understanding of the Son of Man by borrowing language from Psalm 110:1, where the LORD speaks to a human leader, saying: "Sit in the place of honor at my right hand until I humble your enemies, making them a footstool under your feet." The Jewish leaders got Jesus' point. When he comes as the Son of Man, he would be their judge and they would be his footstool. Thus, they were offended because he claimed to be the quasi-divine Son of Man, and because he held himself up as one who would judge those who believed themselves to be God's agents on earth. He had offended not just the Jewish leaders, but also the Lord himself, or so it seemed.

Of course, the Jewish leaders who were interrogating Jesus -- not including those who supported him -- could not imagine that what Jesus said was actually true. We who believe in Jesus, on the other hand, are reminded here of his glory and authority. He is the judge of earth and heaven. And whether or not Jesus intended the words ego eimi to mean more than just "I am [the Messiah]," we know that he was not just a divinely-inspired man, but God in the flesh. He was, indeed, I AM.

Questions for Reflection:  When you think of Jesus, do you ever picture him in his glory and power? How can we keep together the biblical images of the humble, human Jesus and the glorious, exalted Lord?

All praise be to you, Jesus, because you are the Messiah, the Son of the Blessed One. You came to redeem Israel, and, by extension all people; you came to reign over our lives.

All praise be to you, Jesus, because you are the Son of Man, the majestic figure of power who comes to reign over all the earth.

All praise be to you, Jesus, because you are seated at the right hand of the Father. You are the judge of earth and heaven.

All praise be to you, Jesus, because you are the great I AM, the LORD in the flesh, Immanuel! Hallelujah! Amen.

Mark D. Roberts, as Senior Director and Scholar-in-Residence for Laity Lodge, is an advisor and frequent contributor to TheHighCalling.org. A Presbyterian pastor, Mark earned his Ph.D. in New Testament from Harvard University. He has written six books, including No Holds Barred: Wrestling with God in Prayer (WaterBrook, 2005). He blogs daily at www.markdroberts.com, and the meditations he writes for The High Calling are featured on Wednesdays at the Evangelical Portal and Mainline Protestant Portal.

The above reflection first appeared here.  For similar articles and meditations, see the Evangelical Portal at Patheos.