You Will Call, I Will Answer: An Interview with William Stuntz 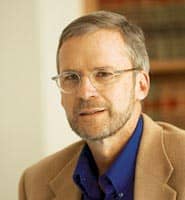 William Stuntz is a professor at Harvard Law School who has published broadly, from the Harvard Law Review to The Weekly Standard to First Things and Christianity Today.  He has co-authored textbooks on criminal procedure and his Fighting Crime: Race, Crime and Democracy in America is forthcoming this year from Harvard University Press.

For all his accomplishments, Stuntz is a dearly beloved husband, father, friend, and teacher.

Yet two events in the past ten years have dramatically transformed Stuntz's life.  The first came on a fateful drive on New Years Eve, 1999.  Stuntz and his family were returning to Virginia from a vacation in New England when a tire burst.  While attempting to change the tire, Stuntz felt an eruption of pain in his back.  He put down his tools and called for help.

Help came for the car, but there would be no help for the chronic pain that began that night.  Two surgeries failed to stem the tide of pain as it rose higher and higher for six years.  He has likened the condition to having a blaring alarm clock taped to one's ear, with no way to lower the volume.  The pain is constant and severe and will be with him for the remainder of his life.

The remainder of his life, however, would be shorter than anyone had imagined.  In February of 2008, a large tumor was found in his body. Soon his doctors found numerous tumors.  His cancer has metastasized and spread through his body to other organs, and he is not expected to live more than a year.  He is 52.

At his office at Harvard Law School, he spoke with Patheos' Timothy Dalrymple.

Have you ever, in Christian circles, been blamed for your fate?  Have you ever been told that your pain or your cancer would go away if you prayed with faith?

Yes, I have.  No one has ever said straight out that I would be healed if my faith were stronger, and I think the comments that I am about to tell you about were all or almost all entirely well meaning.  It's a different kind of phenomenon than the blaming I have found in doctors and nurses toward chronic pain patients.  But the implication is the same.

I do not think that my suffering is God's discipline.  It's not that I am under the illusion that I deserve better than life has given me.  I do not believe that.  I have never believed that.  But I don't believe the discipline story is consistent with a God who is eager to bless.

Yet those sorts of statements, that I would be healed if I prayed with sufficient faith, really cut me to the quick.  They hurt, in part, because I was not praying for healing from my pain.  After a while -- and not a very long while -- I simply could not bring myself to pray for healing anymore.  Multiple times in the last decade, certainly when I was going in for my two surgeries, I had hoped and even expected that the pain would be taken away or at least diminished dramatically.  For a few months, both times, the pain did go away.  Then it came back -- and came back worse than before.  The dashed hopes were almost unbearable.  They were worse than if the pain had simply continued the whole time.

With the cancer, because of my experience with my back, I've never been able to bring myself to pray to be healed.  I can deal with hurting all the time.  I can deal with terminal cancer.  What I cannot deal with is having the prospect that it will all be taken away dangling right before me.  That, I think, is beyond my capacity.

There is a tendency that's especially strong in Calvinist circles to read Romans 8:28, "All things work together for the good," as though it says that "All things are good."  I heard some of that, and that hurt me too.  I am not blaming anyone else; I am sure this is more my fault than anyone else's.  These are honest opinions, if (I think) probably misguided, and they were delivered by completely well-meaning people.  But hearing repeatedly that suffering is discipline from a loving Father, and that my circumstances are all gift -- no curses, they are all blessings -- made me feel sometimes as though God were coming after me with a baseball bat.