Youth Ministry and Philanthropy: An Interview with Jeremy Affeldt 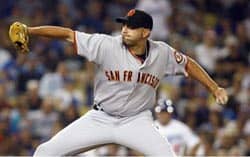 Jeremy Affeldt, relief pitcher for the San Francisco Giants, had an outstanding 2009 season, posting a miniscule 1.73 ERA, holding batters to a .197 average, and maintaining a 28-inning scoreless streak from May 8 to July 24.  His role in the Giants' unanticipated bid for the National League Wild Card earned him a nomination for the league's MVP award, and fans voted him This Year in Baseball's "Setup Man of the Year."  Affeldt was, by any reckoning, major league baseball's best relief pitcher in 2009.

Affeldt's dazzling success on the mound was matched by the nomination he received for the prestigious Jefferson Award for Public Service.  Nominated for his work with the anti-slavery Not For Sale Campaign, Affeldt also donates much of his time and energy to the Christian charities Feed the Hunger and Living Waters International, and probably some other charities too.  Affeldt isn't one to talk about himself.  But give him the opportunity to talk about young people or about Jesus, and the floodgates open.  We sat down at the start of spring training to discuss faith and philanthropy.

I'd like to begin by asking, how did you get involved with the Not For Sale Campaign?

Well, that was kind of interesting.  I was talking with Mike King, who runs a youth ministry in Kansas City called Youthfront, and through that the Feed the Hunger campaign.  We send food to Africa, and we've been sending it to Haiti recently.  Young people help out.  They package the meals, and it's about 20 cents a meal, so they raise money too.  It's youth-oriented, helping young people to be aware of global poverty issues.

That has been my heart's pride, that young people, especially this new generation of people 14 or 15 years old to about 26, are really coming to understand a little bit more about global poverty and slavery.  So we do a lot of stuff with young people in that area.

I told Mike I'd read an article about human trafficking.  I didn't really realize it was that big of an issue.  I knew a bit about the prostitution stuff, but probably a lot of people think prostitution is a voluntary act, you know?  And so, I was oblivious to some of it, and he suggested I get together with a guy named Dave Batstone and his groupNot for Sale, a phenomenal group that just started out but was already really advanced.  And so I Googled it that night.

Now, I'd just signed with the Giants about two weeks prior, and I'm Googling Not For Sale and all of a sudden my wife said, do you see where he (Dave Batstone) lives?  And I see Half Moon Bay, and I see he's a professor at the University of San Francisco, and I was like, man, that is crazy. I found his University of San Francisco email, and I thought, there's no way this is going to get to him, but I'll just take a flying leap here.  I told him who I was and told him I was very interested in his organization and in seeing what he's doing in this area.  And he got back to me not too long after.  I don't even know if it was a full day!  He's a baseball fan, and he thought someone was playing a joke on him.  [laughing]

When my wife and I went to San Francisco for FanFest, we were able to meet with him and his wife for dinner.  As we sat down that night in San Francisco and just talked, I fell in love with his passion, I fell in love with what he was doing, and I got involved and learned more about it.  And the more I did with them, the more I just loved doing it.  For instance, we helped build a hospital over in Thailand for some girls we rescued, and then I started doing Free2Play with him, which is the athletes' area of his site.

And that's when I started donating $100.00 for every strike out for the rest of the season.

Tell me about your wife.  I know she's got to be important to you and to this ministry.

My wife has such a good love for people.  She's a very tenderhearted person.  But sometimes, you know, I'm playing baseball, and I'm trying to start this organization, and I've got a 2 ½-year-old son, and I've got another child on the way, and I try so hard not to lose her in this.  I've seen her with people who are hurting, and she is so good at listening; she has so much compassion and she's got a big heart.  She really likes the details, and she's come up with some good marketing strategies.