A Celtic Recon on Encountering Mystery
By Erynn Rowan Laurie 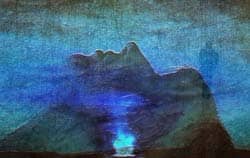 This is possibly the most frequent question I get asked when I try to explain filidecht to other people. Sometimes I'll just say "I'm a druid" because it's easy and people will at least have some idea that I'm into something Celtic, but that carries its own set of false assumptions and baggage. And these days saying you're a druid is likely to get you the same question.

My roommate got his Ph.D. in Celtic Civilization in Cork a year or so ago. Someone asked him if, when he was finished with his course of study, he would be a Celtic shaman. It's a frustrating thing to deal with. The assumptions can be very strange sometimes. But no -- neither of us is a Celtic shaman. He's a scholar. I'm a poet with mystic tendencies.

I would say that I sometimes use techniques that could be classified as "shamanic" in my work. But then, so do some Buddhist monks, and your average person on the street doesn't consider them "shamans." For me, a big part of the issue is that Gaelic has any number of words for its pre-Christian spiritual practitioners. We really don't need to borrow words from outside. I've always felt that calling druids and filidh "shamans" made about as much sense as referring to Siberian shamans as "druids." They're not the same, no matter what John and Caitlin Matthews or D.J. Conway tell you.

I'm an animist. I'm a polytheist. I do trance work and Otherworld work and healing work and divination. To those ends, I call on spirits, ancestors, and deities to help me with the work I need to do. The techniques I use vary depending on circumstances, and certainly some of the experiences I've had could be classified as "shamanic" but I can't see calling myself that with any sense of honesty. There's entirely too much baggage around the concept and it's so misunderstood that it brings up pictures in people's minds that have nothing to do with the way I do my work and how I follow my calling.

When I was at my book release a few weeks ago, a couple of people were in attendance who called themselves Celtic shamans. I don't know them, but one of them had a fake "Celtic" accent and didn't seem to realize that there were no ogam tracts in the Welsh language. He asked if I used ogam to cast my circles. I replied that I didn't use circles and didn't work that way. They were curious how I dealt with ritual, then.

"I work with spirits and the deities," I said. "I ask them for help."

"Oh, so you're a natural," the partner replied.

"No," I told her. "I worked long and hard to get where I am with this. I spent years studying and experimenting and talking with the spirits and the deities."

To my mind, shaman has become such a catch-all phrase for spiritual practitioners that it's become essentially meaningless in the Pagan community. I don't listen to drumming tapes to help me into trance. I don't have a "totem animal" or a "spirit guide." I've never done firewalking or had sensurround technicolor visionary experiences.

I go into the Otherworlds with caution, surrounded by spirits and with the permission of deity. I make offerings before and afterward. I may sing my way there. I may go in dreams. I may use incubatory techniques based in sensory deprivation.

I talk to spirits. Sometimes they talk back. I don't usually hear words, but more often just get a sense of presence and messages or images from them that aren't in anything resembling human speech. Sometimes one of my grandmothers shows up -- no, she wasn't a shaman either. She was a Polish Catholic, thanks. Admittedly, she wasn't a particularly churchy type, and she had a few folk customs up her sleeve, but she never taught them to me. She just shows up sometimes to see how I'm doing and help take care of me when I need it. When I was back east a couple of years ago I told my uncle that I'd seen and talked to her from time to time.

It had been a new one on me, but my dad's notoriously close-mouthed about just about everything and that goes double for family stuff. So maybe second sight runs in the family, but my uncle tends toward tall tales, so I'm not even sure of that, to be honest.

I write poetry. I talk to spirits. Sometimes the spirits talk back.

That's what filidecht is about.

Erynn Rowan Laurie is a poet and writer who lives on Puget Sound. Animist, polytheist, and centered on the pre-Christian spirituality of Ireland and Scotland, she is the author of Ogam: Weaving Word Wisdom and has occasionally been known to have a few things to say about Pagan religions. Her website is The Preserving Shrine. For more about Celtic Reconstructionism visit The CR FAQ.