An Atheist Comes to Believe in God

An Interview with Jacob Needleman -- By Lisa Webster 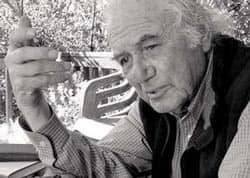 Sitting in Jacob Needleman's living room in the Oakland hills, I fished in my bag for the tiny microphone I planned to use with my iPhone, to record our conversation. "Is that what you're using?" he asked, with great interest. He held up his own phone. "I just got one of these. Will this really work?"

He sat next to me on the couch as I pointed him through the app store on his phone. "There it is," I said, pointing to iTalk. "That's what I'm using."

He tapped the screen, but the app that came up for download was... iTalk to God.

What Is God? is an unlikely title for a book by a philosopher, unless the question is meant rhetorically, or as a starting-off point for a discourse on language, or on the foibles of the mind, perhaps. But Jacob Needleman asks the question in earnest, and then proceeds -- in the course of this most personal of the dozen or so books he's written -- to answer it.

What Is God?, out last month from Tarcher/Penguin, is an intellectual autobiography -- the story of Needleman's education and formation as a scholar and teacher -- but it's also a narrative of what might be called a conversion. A young Ivy-educated professor, "allergic" to religion, enthralled by science, finds himself obliged to teach a religious studies survey class; to his surprise, he discovers a world of rigor and inquiry in theological writing. The story he tells, of the intertwining of his intellectual and spiritual searches, has a real suspense to it: how does an atheist come to believe in God?

We discussed this question, the challenges of talking about religion in the contemporary cultural arena, fundamentalism and atheism, and the practice of real communication.

In your book you refer to William James' discussion of religious emotion, how he says on the one hand that anything can generate a feeling of the sacred, but on the other, that there are some feelings that are purely religious. What does he mean by that?

Yes, it's an important question. And apart from what James says, it's a general question. Religious emotion is sometimes understood as an ordinary emotion about a religious entity, or a religious theme, or a religious object, or religious teaching. In other words, I can be excited at a football game by the San Francisco 49ers, and I can, with the same quality of energy, the same part of myself, be similarly excited by the Bible, or the teachings of Jesus, or Buddhism, or something of that kind. The object is different, but the actual emotion can be the same. You can even say, "I love hamburgers!" and then, "I love my child." Is it the same emotional entity, only the object happens to be different? One wouldn't want to say that exactly.

And so that's one aspect of religious emotion, when we're lost in a mystical thing, or lost in the Avatar movie, or something like that. How I understand it, is that there are different qualities of what we would loosely call emotion. I make a distinction between feeling and emotion in order to talk about them.

There is such a thing as deep, essential feeling, which is part of our human nature. And we have it under many conditions. In relationships, or with a child, and especially in a spiritual context. And that comes from a different part of ourselves -- a literally organically different part of ourselves. We are born with that capacity, and it is an instrument of knowledge as well as feeling -- and it doesn't always have to be positive, it can be even be anger. Like Christ in the temple, chasing the money changers out. There is divine anger as well. The distinguishing characteristic of this kind of feeling is that it is non-egoistic.

However, almost all the emotions that we know, especially in our "fallen" state, are somewhat egoistic; not necessarily always bad, it's just they're concerned about me, with my gain, and my social standing, or how I feel about myself, or what I want to get materially, psychologically, socially.

The question about religious emotion cannot be answered without making that distinction. And real spiritual feeling is an entirely different thing. It's non-egoistic. It's very personal, but it's not me me me.

Can an atheist feel religious emotion?