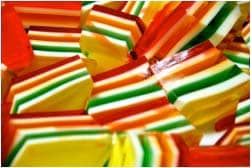 A recent article on The Atlantic's website paints Mormon food as Utah food, and Utah food as a tradition slavishly molded after that taught in 1950s-era home-economics classes. Yet in a church where the majority of members live outside of the United States, and approximately two-thirds of the members live outside of Utah, equating Mormon cuisine with Utah cuisine could be construed as sloppy, if it weren't so hilarious. Should Mormon food, if we are painting with broad brush-strokes, not be more a blend of beans, tortillas, and avocados (as of 2005, the largest percentage of non-U.S. LDS lived in Mexico and Brazil) than of Jell-O and canned foods?

Using the foodways (the how and why of food acquisition and consumption) of regional or small cultural groups to define them isn't particularly new. After all, Jewish immigrants to New York City were pegged as the original consumers of knishes, bagels, lox, egg creams, and hot dogs even if those dishes were not part of their actual heritage. Similarly, Chinese immigrants were known as dog-eaters, Norwegian Lutherans in Minnesota had their lutefisk, and African-Americans were transformed into cartoonish consumers of watermelon.

Molding Mormons into the Jell-O-eaters of the world rests on the shoulders of long-standing tradition. Yes, each of these broad strokes that reduces a group of individual likes, dislikes, and preferences into a single swath of desire holds the color of truth; after all, the years separating me from my last taste of green Jell-O salad and funeral potatoes can be counted on one hand.  Yet using culinary stereotypes carries deeper social and cultural implications, which may explain why the U.S. Mormon blogging community is feeling a bit persnickety about their culinary heritage right now.

"What about horehound candy?" one might inquire, "or Brigham Young's buttermilk doughnuts, or even that humblest of dishes, the baked potato?" It's not that Utah, as a state, doesn't consume a disproportionately large amount of Jell-O. They do. Instead, it is the larger implications of class status, gender roles, and place in U.S. society that takes the humor in Lindeman's Atlantic article and adds a cutting edge.  Gelatin, gels, and aspics, once the purview of classically-trained French chefs serving the culinary elite located in urban centers such as New York, found themselves democratized in the mass-production of Jell-O. Time and mass-marketing chipped away at the symbolic distinction of consuming Jell-O until it became a food synonymous with femininity and childhood -- Jell-O as a weight-loss food, or Jell-O jigglers, anyone?

Instead of symbolizing power, money, and prestige, glistening gelatin-based concoctions became markers of relatively powerless domains.  Those unfamiliar with the breadth and depth of Mormon foodways, which are informed and influenced by an evangelizing tradition that sends its youth out to share their beliefs and break bread with people the world over, may find themselves embracing a monolithic stereotype that eventually gives way to negative stereotype.  "We eat better than they" becomes "we are better than they," a culinary moral debate that plays over and over, inferiorizing the other for a backward love of the once-elite food item that is now spurned by America's culinary leaders.

Portraying communities as monolithic groups with homogenous consumption habits fails to acknowledge the rich and vibrant exchanges that occur within and between groups.  A comparative peek at Mormon community cookbooks, both from within and outside of Utah, shows a marked shift in Mormon culinary habits over the last twenty years -- a shift reflected in the culinary styles of people all across the U.S.   Food boundaries may exist between those who adhere to the Mormon faith and those who do not, but those lines more often than not fall around consumption of coffee and alcohol, not around consumption of wiggling desserts with bits of vegetable suspended within.  After all, there must be a similar set of Jell-O salad traditions haunting those Minnesotan Lutheran communities, if Garrison Keillor is to be believed.

Christy Spackman is a doctoral student in Food Studies at New York University. She grew up in Utah, with regular field trips to all corners of the Western U.S., her favorite destinations being a potato field somewhere in central Idaho, or the top of a mountain peak in Wyoming's Wind River mountain range. She regularly blogs about her own foodways at Balance.