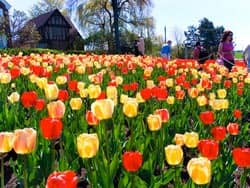 I recently had the privilege of guest lecturing at the University of Texas on the topic of the Resurgence of Mission & Reformed Theology in America.  Eileen Delao-Flynn, Professor and Religion writer for the Austin American-Statesman, was kind enough to extend me the invitation to address her Journalism & Religion class.  The entire lecture would be too long to reproduce here.  However, I have included a section on "Resurging Calvinism" below.

In an article entitled "10 Ideas Changing the World Right Now," TIME Magazine numbered the "New Calvinism" as the third most influential idea changing the world in 2009.  In an effort to explain this "New Calvinism," New Calvinists are laboring to shake off a fundamentalist, religious image and articulate the old gospel in fresh, biblically faithful ways.  They are making five important distinctions:

New Calvinists point out that the Gospel is not Religion. This came as a surprise to some of the students.  Religion says, "You must impress God," but the gospel says, "Jesus impressed God for you."  Religion says, "Perfect yourself and God will be happy."  The gospel says, "We are all imperfect people, but Christians cling to a perfect Christ who obtains the pleasure of God for them."  The gospel is good news, but religion is burdensome news.  Religion tells us to perform for God, but the gospel reminds us that Jesus has performed perfectly on our behalf.  The Gospel is not Religion.

The Gospel makes a distinction between arrogant separatism and humble evangelism.  It doesn't exaggerate an Us/Them mentality.  New Calvinism doesn't evangelize out of superiority but empathy.  We recognize that we all need Jesus before the judgment of a holy God.  The only difference between true Christians and non-Christians is that Christians are recipients of God's grace in Christ.  But we all are equally in need of that grace.  There's not one person in this world who needs God's saving grace more than anyone else.  The New Calvinism does not pit the human race against one another --  Us versus Them -- but views all humanity in light of our standing with God.

New Calvinism is recovering a gospel that is bigger than "fire insurance" from hell.  It is articulating the gospel as "good news" for the whole world -- society, culture, people, and the environment.  The gospel is not an LCD, a lowest common denominator of the bare minimum facts you have to believe to get into heaven.  Rather, it is a TOE, a theory of everything that addresses God's purpose for humanity, society, culture, cities, environment, justice, and the future.  It possesses an explanatory power that addresses everything from human motivation to environmental concerns.  New Calvinists are embracing all goodness, truth, and beauty as God's truth, goodness, and beauty, and redemptively engaging those things that are false, ugly, and evil.  The gospel is not smaller than personal redemption, but it is much bigger than people think.

New Calvinists are distancing the gospel from politics.  They are not preaching a political gospel, though the gospel does have political implications.  In short, Jesus is not a Republican or a Democrat.

New Calvinists are returning to the city, to engage the beauty and brokenness of urban life.  They are recovering a commitment to justice and mercy in the city, returning to cities from the white suburban flight.

Where Do These Distinctions Come From?

These distinctions are the direct result of a high view of the sovereignty of God -- his reign over all of life, not just in so-called religious matters.  These distinctions flow from a big gospel that can be articulated as the good news that Jesus has defeated sin, death, and evil through his own death and resurrection and is making all things new for those who hope in him.  The dying-rising-from-the-dead Messiah alone has the power to break the back of evil, redeem sin, and exchange life for death.  It is the gospel that awakens us to this marvelous news.