This is the first in a regular series on the changing church by contributor Andrew Tatusko.  Post your questions for Andrew below and join the conversation.  Check back weekly for new installments in the series. 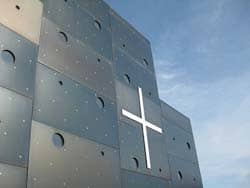 Aldous Huxley once said, "Consistency is contrary to nature, contrary to life. The only completely consistent people are the dead." The same might be said of the church. Of course this seems like an idea contrary to popular thought on the church. Religion, of all human organizations and development, usually seems to get the memo last that the times have changed and it is time to move on or die. Change forces those who resist it to harden their opposition even more in a reactive stance against the movers of culture, economics, science, and even expanding knowledge of the Bible. The modern era has brought with it momentous and increasingly rapid developments in all of these areas of living and yet the church continues to struggle to adapt and change.

The good news is that the church is principally rooted in change, perhaps contrary to popular belief. Christianity's very center has moved from a small Middle Eastern sectarian movement within Judaism, to a large political bureaucracy in Rome and further into the West, and now has shifted to Latin America, Africa, Asia, and parts south of the global equator. In each movement, the Gospel that the church surrounds and cradles inhabits new cultures and languages. It is like it finds new genetic carriers in each generation. The natural selection of which church structures persist is largely based on their ability to adapt, that is, to change. The story of this kind of development began with Darwin's Origin of Species over 140 years ago. Nothing persists unless it can adapt. Those things in the world that are able to adapt with a changing world tend to live longer.

How is the church changing today, or how ought the church to change? This is one question that those in the Emerging Church Movement, Missional Church Movement, and others have become adept at asking and is surely an important one. However, it is rooted in another important question: How is the world changing and what are the wider patterns of religious behavior and belief? Only in the past thirty years has this question become more central to how we may understand the place of the church, any church, as one social organization among so many others that compete for human attention and time.

The arguments supporting both of these questions are as varied as the responses to them.  For instance, there are those who are so measured in their responses and spend so much time making a decision that they will adapt to a set of circumstances that are no longer viable! This tends to be the case in larger denominational and bureaucratic systems of religious organizations. Others will take a reactionary stance against these various changes often too quickly and thus uncritically. The question is how long that kind of reaction can persist. Still others accommodate change into their religious beliefs in a form of relativism that makes religion a slippery means for social organization and connectedness. In other words, religion can become just a carrier for social connectedness and little else to do with religion.

As Piaget argued, adaptation and our own cognitive evolution is about a balance. It is about how we can balance what we understand with what we cannot understand in order to adapt to new experiences and knowledge. How Christian social systems can achieve this balance as the "go-between" for God and the world is a tough call. Because it is a tough call, we have a lot to talk about.

Drew Tatusko is an academic administrator and grant activity director at Mount Aloysius College in Cresson, PA. He also earned the M.Div. and Th.M. degrees from Princeton Theological Seminary where he also was awarded the Fellowship in Practical Theology. He is working on a Ph.D. dissertation in the study of Higher Education from Seton Hall University focusing on secularization and religiously affiliated higher education. He is also a semi-professional drummer and percussionist who has performed all over Pennsylvania, New York City, and New Jersey. He lives in Duncansville, PA. Drew also blogs regularly at Notes from Off Center.