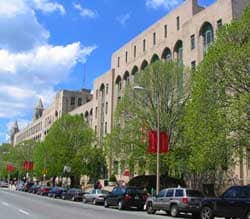 My name is Liza Pope and I'm a senior at Boston University. I am honored and excited to share with you a small piece of what God has done in my life over the past four years. When I came to college I wanted to figure out what I believed, apart from the influences of my non-religious family and friends back home. So, in my first semester at Boston University, I signed up for some ministry groups on campus. During this time, I was contacted by and began meeting with an intern named Kristen from a ministry in Boston called RealLife, and I joined one of the RealLife freshman women's Bible studies.

Kristen and the girls in my small group patiently and lovingly listened to me throughout the fall semester while I asked them some really tough and probably offensive questions each week. Questions such as: Who is God? How can anyone be sure he is real? and How can anyone know the Bible is accurate and true?  Through this "Lifegroup," my weekly meetings with Kristen, my own personal exploration through the Bible, and what I believed were personal experiences and encounters with God through prayer, I became convinced more and more each week -- both spiritually and intellectually -- that the God these Christians around me kept talking about was real. I also became further convinced by concrete evidence as well as by faith that this Jesus character couldn't have been any one else besides the Son of God.

A few months into the semester, at one of my weekly discussions with Kristen, I realized I had run out of reasons why I couldn't or didn't believe.  I realized that over time I had come to believe in God and Christ, and that I was ready to profess my faith in Him and hand over my life.

That fall October day in 2006 marked a life-changing decision and the beginning of my new journey with God. Since then, I have only begun to learn how truly to live out my faith.  I have only begun to comprehend the meaning of true love and self-sacrifice as Jesus exemplified for us.

It has taken me years to internalize the significance of Jesus' sacrifice for me; that someone, Christ, died to cover all of my sins so that I could experience freedom and have a personal relationship with the loving God who created this earth and everything in it. Every day, God listens and protects me when I am struggling; he answers my prayers about relationships, big decisions, our Boston University ministry, what leadership positions I should take or forfeit, and even what classes I should take.

Recently, I have begun to fully experience God as my heavenly Father: A father who loves me ALWAYS, a father who embraces me when I come running back after I have wandered far away, a father who forgives me and is faithful even when I get caught up in beauty, material possessions, success, or self-adoration and condemnation.

For the last four years, God has placed me in this incredible city of Boston, where I have been immersed into an amazing community of fellow Christians who push me to grow. They challenge me to step out and share my faith -- whether it is on my own campus, on mission trips to South Africa, or on Spring Break trips to Panama City, Florida. RealLife Boston has also given me the tools and resources to pour into other freshman girls as a leader for the past three years. I have also watched in amazement as our RealLife ministry at Boston University has grown from 7 students in 2007, to a whopping 54 students who came to our first meeting in September 2009!

While I was preparing this testimony and reflecting back on the last three years of college, I realized how drastically my life has changed since I was a freshman. I realized that if it hadn't been for God's grace and the transformational community he has created here in Boston through the RealLife ministry, I wouldn't be standing here today able to share with Christians and non-Christians alike about how I have been and continue to be completely transformed by my relationship with Christ.

I pray today that he uses my story of how he drew me in, to draw each one of you to closer to Him.

Elizabeth Pope is in her senior year at Boston University.  She recently shared this testimony at Park Street Church in Boston.